Google 3D Animals: How to use Google AR feature with your phone

Augmented reality isn't limited to just capturing Pokémons or attempting a dry run at arranging furniture in your home without having to break a sweat. One of the most fun uses of this technology is to bring pets, famous athletes, and even dinosaurs right into the comfort of your home using Google search. Learn how to maximize this feature in this tutorial.
Post Views: 38
PrevPrevious
NextNext

To view 3D objects with Google’s augmented reality feature, you will first need a smartphone or tablet that supports ARCore (Android 7 or higher) or ARKit (iOS/iPadOS 11 or higher).

The list of compatible devices can be viewed on this page, which is updated from time to time. For selected Android devices, you may need to install or update the AR app from the Google Play Store.

Using all of the various smartphone processors simultaneously does consume a lot of battery and heat up the device – it is somewhat akin to playing a game with all of the bells and whistles turned on. Therefore, before using this feature, it is highly recommended charging your device until it is full and not use the augmented reality feature if the smartphone/tablet is hot to the touch.

To demonstrate how to use Google’s augmented reality feature, let’s take a look at a cat as an example. Apparently, this is a hugely popular search term on the Internet…

How to view a cat in 3D in your home

Search for “cat” or use a compatible search term (check out the list below).

In the results screen, tap the View in 3D button.

In the 3D display, tap the View in your space button.

Authorize access for the device camera and follow the given instructions as you pan across your current environment.

The augmented reality display lets you capture photos or record videos by interacting with the 3D animation, just like how a regular camera app does. In addition, some search terms offer the option to view related subjects in 3D – such as “More Animals” in the example above. Fancy having a giant panda in your living room?

Did you know about Google’s augmented reality feature before this? Do you like playing around with it? What other augmented or virtual reality features do you often use on your smartphone or tablet? 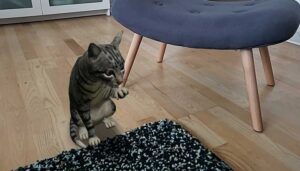