It was indeed a messy affair when it comes to Google’s management of its Driving Mode. We still remember that back in 2019, Google announced the availability of Driving Mode for the US. Even after much fanfare, it took more than a year until they finally introduced it in their home country at the end of 2020.

Even then, it was a bit confusing, because this mode that is known as “Driving Mode” was supposed to bring Android Auto’s features onto the smartphone. On the other hand, Android Auto is deemed to be a separate platform, so nothing clear separates the two at this point in time.

Assistant Driving Mode: Is it coming or not?

Google announced at the end of March that Driving Mode will be released internationally and will also be introduced as part of Google Maps. We learned that Google is slowing down the international rollout once again and is only testing an “Early Access” version in a few countries while offering it in just one language – English.

However, this step backward has not prevented the “Google Assistant Driving Mode” from appearing to users. Please don’t be surprised here if you cannot find it in your settings just yet. The Driving Mode is apparently still being rolled out in a conservative manner.

By the way, in order to make your confusion complete: For me, the Google Maps feature has arrived in two smartphones, where after a while it disappeared from one of the two handsets. Go figure!

This confusion would most probably be a true reflection of Google’s thoughts concerning the future direction of Android Auto. It does not look as though it is going to be something as simple as porting Android Auto over to the smartphone, but also about integrating applications and features such as Driving Mode, Google Maps, while making sure that Google Assistant works together with them in the most sensible manner for a consistent experience across the board.

How to find and activate Driving Mode in Google Maps

Now, if you want to find out if you’re already one of the select few who can activate Driving Mode, you’ll have to dig deep into the labyrinth of menus in Google Maps. It is there where you will find the feature. On Google’s support page, we learn that the minimum requirements for the driving mode are Android 9.0 and a smartphone with at least 4 GB RAM. In addition, the smartphone must be used in a Portrait mode.

“Auto” function can be found within the navigation settings / © NextPit

Launch Google Maps on your smartphone.

Tap on your profile picture in the upper right corner to open the menu.

Next, select the navigation settings.

If you have already received the corresponding update, you will now find “Manage driving mode” under Google Assistant settings.

In “Manage driving mode”, you can then activate the Driving Mode feature via the slider button.

As an alternative to Google Maps, you can also select the function directly via Google Assistant. In this case, proceed as follows:

Scroll down the settings to Getting Around.

There you will find the item “Car” at the very bottom, which you tap and then land in the same menu that you see in the above right screenshot.

By the way, in the support page link that was provided above, Google also described a way to activate the Driving Mode function, but it mentions the menu item “Transportation”, which is not yet found in the Google Assistant settings. So much again for consistency shown by Google. But at the very least, they are hinting at such a feature on the page.

Once the feature is activated, it allows you to control various settings in your car by voice easily. For example, you can initiate a call with the command “Make a call” or “Call [contact]”, send messages with “Send a message to [contact]” or “Send a message” to send messages, or “Play [Artist]” or “Play [Genre]” to listen to your favorite tunes.

Let us know in the comments if you have already found the feature in Google Maps on your device, and whether it works for you or not. I would also be interested to hear what you think about Google dragging their feet over the issue surrounding Driving Mode. 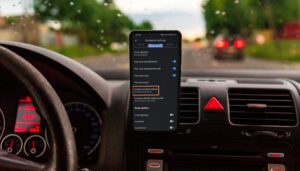