What is Gorilla Glass? Know the differences between each version

What is Gorilla Glass?

Developed by Corning Inc., Gorilla Glass is a glass made from a material called alkali-aluminosilicate, which is formed by bonding aluminum, silicon, and oxygen together. Corning started developing Gorilla Glass technology starting in mid-2005. It was designed to make smartphones and handheld devices resistant to damage and scratches while also being lightweight and thin.

However, Gorilla Glass wasn’t the first advancement Corning made in this sector. The company was formerly known as Chemcor, and they had been in the business of manufacturing resistant glasses that were used on household items, ophthalmic devices, cars, aerospace, and pharmaceutical applications. Ironic, considering Corning is now mostly now for its glass on smartphones.

Although phones with Corning Gorilla Glass are less susceptible to scratches and breakages, please do note that the technology does not make your phone (or tablet) unbreakable. As mentioned above, think of Gorilla Glass as a technology that aids in increasing the durability of your smartphone screen over long periods of use and rescues it from accidental drops.

In the sections below, we talk about the different versions of Gorilla Glass, starting from the very first variant that was released in 2006-2007  alongside the first-generation iPhone – to Gorilla Glass Victus, which was released less than a year ago in July 2020.

The first Gorilla Glass was ready between 2005 and 2006, but its big debut really came with the iPhone. Apple released its device to the world in 2007, and, at the company’s request, the technology on its display was 1.5 mm thick and had an oleophobic coating, which minimized fingerprints and smudges.

Gorilla Glass made its smartphone debut on the iPhone / © NextPit

The iPhone wasn’t the only smartphone to have Gorilla Glass on its display, though. Corning was able to get its tech onto about 250 devices in just the first generation.

In 2012, Corning released Gorilla Glass 2 at CES. The glass was just as resistant, but its main update was its thickness. The second generation was 20% thinner than the first model. In lab tests, it could withstand up to 50 kg of pressure without cracking or breaking.

In that same year, Gorilla Glass was shipped on 600 million devices. Since this version was thinner than the first, it let manufacturers develop lighter and thinner models of their phones. Both the Nexus 4 and the Galaxy S3 came equipped with Gorilla Glass 2.

Gorilla Glass 3 glass brought even more resistance with it, unlike the previous version which was more focused on thickness. This is also the generation that introduced Native Damage Resistance (NDR) technology, which allowed the glass to handle even deeper scratches. According to Corning, the third generation prevented up to 35% of the scratches on the display.

To commemorate the third version of their tech, Corning planned on increasing the resistance of its Gorilla Glass three-fold compared to older versions. They could do this thanks to a new manufacturing process. GG 3 was released at the CES 2013, and it came on models like the Galaxy S4, the Moto G, and the Moto X.

In 2014, Corning presented its Gorilla Glass with a bold new objective. Through one of its surveys, the company found out that 70% of cell phone screen damage was due to drops, and so it began investing in reinforcing its glass. Gorilla Glass 4 was developed focused on the idea of being resistant to drops.

In fact, according to lab studies, the fourth version of Gorilla Glass was twice as strong as its predecessor.  The Galaxy Note 5 and ZenFone 2 Laser are a few models that came with Gorilla Glass 4.

The fifth generation of Gorilla Glass – aptly named Gorilla Glass 5 – was released in 2016. It focused on providing even more resistance to drops, and it delivered four times the strength as the previous version. Corning also revealed that in lab tests, Gorilla Glass 5 managed to survive drops of from up to 1.6 meters.

Gorilla Glass 5 also claimed that it was less susceptible to cracks even if the phone was dropped on extremely hard surfaces. Gorilla Glass 5 was used on products like the Samsung Galaxy Note 20 and the Moto G 5G.

It was also in 2016 that Corning announced its first-ever product for wearables, Known as Gorilla Glass SR+.

Launched in July 2018, Gorilla Glass 6 was a real step up from the fifth generation. At the launch, Corning revealed that it had subjected the new variant to rigorous new testing methods. The result? Gorilla Glas 6 claimed to be strong enough to withstand 15 consecutive drops on to hard surfaces (from a height of 1 meter). It was rated to be twice as strong as Gorilla Glass 5 and is still fairly common on smartphones used in 2021.

In 2018, alongside Gorilla Glass 6, Corning also announced the launch of Gorilla Glass DX and DX+. Both these products were intended to be used on smartwatches and fitness trackers. Along with scratch resistance and durability, another factor that Corning focused on with Gorilla Glass DX was superior outdoor visibility.

These new glasses boast of an anti-reflective property which, according to Corning, offers better visibility while also improving scratch resistance.

In July 2020, Corning announced the launch of its latest iteration of Gorilla Glass for smartphones, tablets, laptops, and wearables when it launched Gorilla Glass Victus. With this product, Corning also seems to have abandoned the numbering scheme that we have been so used to over the years.

Does my phone have Gorilla Glass?

In such a scenario, you might need to do a bit of digging around if you are really keen to know what variant of Gorilla Glass your phone has. While not exhaustive, Corning does maintain a list of products that uses Gorilla Glass. Take a look at it here. 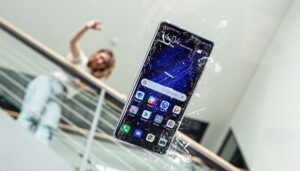