Ghost image or screen burn-in are names given to permanent discoloration of your smartphone’s screen caused by irregular pixel usage. The prolonged use of static images can create a permanent shadow or ghost of that image on the screen. This problem is more common than you think and happens most often on AMOLED screens (although LCD displays aren’t always immune).
Post Views: 49
PrevPrevious
NextNext

If you are looking for a screen burn-in fix for your smartphone, let us inform you at the outset that severe cases of screen burn-in are difficult to fix, and the solution almost always involves replacing the display.

Screen replacements, however, are an expensive proposition – especially if your phone is out of warranty. And in cases where the screen burn-in issue isn’t that prominent, it is best that you look for other fixes. And that is what this article aims to explore.

The workarounds offered below, therefore, are best applied to cases of minor screen burn-in.

What is screen burn-in?

At the outset, it is important to know what this problem actually is. A screen burn-in is the phenomenon observed on displays where a part of the display suffers from permanent discoloration – often caused by prolonged use of a static image. It is also important to note that OLED displays are much more susceptible to screen burn-in than their LCD counterparts. In fact, what people think of as screen burn-in on an LCD panel might usually another issue.

While modern AMOLED displays are much better at resisting screen burn-in, if your phone tends to display many static images (Hint: Always-on display), the chances of screen burn-in do increase. But newer smartphones and wearables feature several mechanisms (aptly named burn-protection) that reduce the chances of screen burn-in. The way this works is by shifting a static image or text by a few pixels so that the pressure to stay on is not borne by a group of pixels.

Also important to note is the fact that screen burn-in is a hardware issue and affects OLED-based panels across a wide spectrum of products. For the same reason, any product that uses an AMOLED panel – ranging from Apple iPhones to Samsung Galaxy devices and OLED TVs could be prospective victims.

The scope of this article, however, is limited to addressing screen burn-in issues on Android and iOS smartphones.

In a desperate attempt to find a fix for the screen burn-in problem on your phone, you search on Google, and it turns out there are several apps that claim to address the problem. But how effective are these apps, really?

First things first, you need to know that a screen-burn-in is a hardware problem. Attempting to fix it using software is almost always an exercise in futility. It is no surprise, therefore, that the reviews of most of these apps are mixed. But then what exactly do these apps do? And what about users who claim that their issue was fixed after they installed and used the app?

While some of these apps can be of help, and there are reviews where people have claimed they work, the general philosophy of these apps is to try and “burn” the rest of the screen to match the colors of the area. While this might work for you initially, you should know that eventually, you aren’t helping solve the issue. Think of these apps as temporary workarounds until you replace your display.

For LCD screens, there’s a dedicated app, LCD Burn-in Wiper that could possibly fix minor cases. However, this tool is not suitable for OLED or AMOLED displays, such as those found on most modern flagship smartphones. For that, you’ll need a different app.

For Android smartphones with OLED/AMOLED screens, it is a good idea to try an app called Ghost Screen Fix – Burn-In. iPhone users can try out an app called Doctor OLED X from the App Store.

In most of these apps, the “fix” is to display a sequence of primary colors in an attempt to restore the “burnt” pixels. Interestingly, this was the original function of computer screen-savers: one dynamic image that appears when the screen is idle to make the pixels “exercise” and ensure that the same area of the display doesn’t remain constantly illuminated.

The results that you may get from these apps will vary based on how bad the screen burn-in issue on your phone actually is.

A workaround that has been suggested by one of our users involves an app called ‘Negative Image’ from the Google Play Store. This is what NextPit user Chai Bula did to fix the screen burn-in issue on his smartphone.

Take a screenshot of your screen when the screen burn-in issue is the most visible.

Use the app to create a ‘Negative” image of the screenshot you just saved.

Open the negative image, which matches pixel to pixel with the original screenshot, and for the same reason, it will precisely overlay the affected pixels.

Turn the brightness up to maximum, and this could help in improving things

What if nothing works?

As already mentioned in the introduction, screen burn-in is an issue with the actual hardware. As such, a proper fix to the problem usually involves replacing the display.  However, do note that modern displays are much more resistant to screen burn-in compared to their older counterparts, and the devices they are attached to also boast of several screen burn-in protection mechanisms. For the same reason, chances are high you will rarely see a screen burn-in issue on newer devices that are so severe, a screen replacement becomes necessary.

However, in the rare instance the problem is awful, the best bet is to contact your manufacturer directly. If your smartphone is under warranty, they will offer you a fix. Do note, however, that an out-of-warranty screen replacement might be quite an expensive affair. In fact, in some cases, it is cheaper to simply buy a  new phone instead.

How to prevent screen burn-in from happening?

As you might have understood by now, screen burn-in can be an annoying problem. That being said, there are quite a few simple steps you can take so that your smartphone never encounters this issue at all. Note that the steps below are applicable for both Android smartphones and iPhones.

Keep the brightness levels of your phone display to low or moderate. Never keep it at full brightness for extended periods of time.

If you are not a huge wallpaper buff, the best solution is to use a black screen as your wallpaper. On AMOLED displays, this effectively turns the pixels off – and therefore, no fear of burn-in!

As much as possible, enable the dark mode feature on your smartphone. 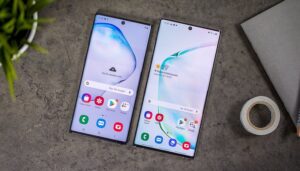