Is it unbearably hot outside again as the temperature begins to rise, and you're thinking of running to the nearest ice cream parlor to cool yourself down? Perhaps you should be a little less selfish and think of your loved ones, too! That's right, your smartphone is very heat averse. That's why NextPit has compiled some tips and tricks to help you protect your smartphone from the soaring heat as summer arrives.
Post Views: 47
Share on facebook
Share on twitter
Share on pinterest
Share on email
Share on whatsapp
Share on skype
Share on linkedin
PrevPrevious
NextNext

Rising temperatures and bright sunshine usually put you in a good mood, but summer is a challenge for just about all smartphones. While your smartphone does produce a lot of heat when you’re charging it or having it run some processor-intensive tasks, the heat from the sun alone is more than enough to heat up your handset.

That’s why you should pay more attention to where you leave your smartphone during the summer and the conditions of where you want to use features such as fast charging. In order to prevent damage to components such as the battery, SoC, and just about everything else inside, here are five tips that you should definitely follow when it gets unbearably hot outdoors.

Tip 1: Do not leave your smartphone under the blazing sun

Modern smartphones are a composite of glass, metal, plastic, and other materials that are pretty good heat conductors. It’s not for nothing that manufacturers use the smartphone’s back to dissipate heat generated from its internal circuitry. While the materials inside the device do provide a certain measure of cooling, they can also heat up quite a bit in the sun.

Being under direct sunlight is not good for your smartphone in the long run! / © StockSnap on Pixabay

On one hand, you can injure yourself by accident when touching the extremely hot glass display. On the other hand, the smartphone’s battery can suffer long-term damage at temperatures that exceed 40 degrees Celsius. If you’re out and about and want to take your smartphone to the park, for example, just place it under a picnic blanket or leave it in your backpack. That way, you can make sure that your beloved smartphone does not get in the way of direct sunlight.

Tip 2: Avoid leaving it in a car

What applies to children and dogs, should also be considered for the smartphone. This is not to equate the Redmi Note 10 Pro as something that is both adorable and cute but to advise you against leaving it in the car. While it’s convenient to just leave your smartphone in the center console while shopping, it’s definitely not healthy for your handset.

Cars are well-known to heat up easily, making things uncomfortable for your smartphone. In addition to potential damage to your handset, an exploding battery is not going to bode well in a car. It’s best to take it with you to the supermarket or put it in a cool place like the glove compartment. Even then, always look for shaded parking whenever possible, as the glove compartment too, can get extremely warm if you were to park under direct sunlight.

I’ve already explored the topic of smartphone charging in brief, but we should think about it more carefully. As I mentioned in my article about the potential damage of fast charging, the temperature remains a sore point with lithium-ion batteries. Manufacturers test their charging technologies under laboratory conditions, of course, and do point out having the right ambient temperature is crucial.

Fast charging technologies are practical, but they heat up your smartphone quite a bit even in winter / © NextPit

With super-fast fast charging, the handset itself gets pretty warm and if it’s under the sun while doing so, that can be a potentially harmful situation. So, don’t charge your smartphone on the balcony, but rather, do it indoors. If this is not possible, you should take off the handset’s protective cover during the summer to help in heat dissipation while charging.

Tip 4: Please, please, don’t put it in the fridge or in the water!

I can already hear your criticism in the comments that no one would come up with such a stupid idea. But just because you’re tech-savvy, this doesn’t mean everyone else is! The idea of cooling down your smartphone with water or putting it in the fridge for a few minutes is, of course, an obvious thought at first.

Although many smartphones are waterproof, you shouldn’t hold them under the tap to cool them down. / © NextPit

However, not all smartphones are water-resistant, and when placed in the fridge, condensation can happen in the handset itself due to the extreme change in temperature. If this condensation ends up on the more sensitive components, it can result in dangerous short circuits. In other cases, the camera lens will fog up from the inside and you will end up having problems taking nice photos in the summer!

If you are like me, you prefer to place your smartphone in your pants pocket. Somehow, the world has agreed on the “smartphone in front right, keys in front left, wallet in the back right” configuration. During summer, the smartphone can experience double the rise in temperature in that position.

The best flagship smartphones you can buy today

The sun will beat down unrelentingly on the pants fabric at the front, and your regular, non-Covid body temperature of almost 37 degrees will ensure the smartphone remains warm from the back. A good way to give the smartphone more circulation would be a smartphone strap. While these may not look cool in the eyes of some NextPit readers, they are a great way to get that warm handset out of your pants in the summer while keeping them safe and secure.

What tips do you have to prevent your smartphone from overheating?

Last but not least, we love to hear from you about tips to prevent your smartphone from overheating during summer! For example, do you use a gaming smartphone with an external fan or do you have a case that keeps your handset running nice and cool? Let us know of your tips in the comments and do participate in our poll! 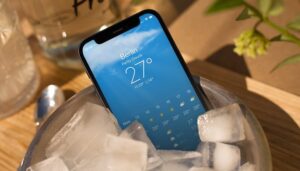