How to get started as a game streamer

Get set up right

A game streamer leads with personality, but it all starts with technology. It goes without saying that you’ll need a decent console or PC that can handle the type of game you want to stream, plus a good camera and microphone. Your followers can see and hear you clearly! What a lot of people don’t realize before they start is that gaming is only half the hardware battle. The other half, naturally, is the video streaming side.

For example, a PS4 for gaming and your PC for streaming. / © NextPit

Ideally, you’ll have your gaming machine of choice plus a PC to do the video streaming (the second monitor also comes in handy so that you can watch your own stream and respond to your viewers). Streaming your videos in the highest quality possible requires a video capture card to connect the two machines. This will enable a high bitrate stream and ideally, a custom overlay so that you can give the stream your personal touch.

When choosing your capture card, it’s important to balance your budget against your needs. For example AVerMedia, a Taiwanese manufacturer, offers a range of cards at different price points, depending on how big an investment you want to make.

If you want to go all-in and stream at the highest quality possible, capture cards that let you offer your stream in glorious 4K also exist. The high-end Live Gamer 4K ($285 / £240) can capture 4Kp60 HDR video and stream at a silky smooth 240 FPS refresh rate in FullHD. You’ll have to open up your streaming PC tower and physically install this card, but it comes with RGB lightning to glow along with the rest of your gaming gear.

The heavy-duty Live Gamer 4K (right) has to be inserted into your PC tower.  / © NextPit

It’s worth noting that Twitch doesn’t support 4K streaming (yet), but YouTube does.

Being a successful streamer is not so much about gaming skill, but personality. You’ll be an entertainer akin to a presenter on a TV show. All the high end hardware in the world won’t help if you don’t apply a little showbiz know-how.

For some, this means finding a gimmick or playing a character, like Rudeism’s homemade controllers or Burke Black’s pirate act. For others, it’s fine just to be yourself…but make sure you’re talking and engaging with both what’s happening in the game and on your stream. Followers will return if they feel like they’re not just passively watching you, but actually interacting and joining the party. 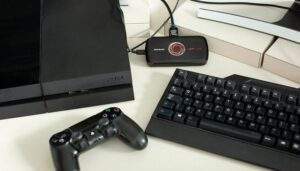