Fake chargers are dangerous: Here’s what to look out for

Fake chargers should not be trifled with. Fake cell phone chargers have been responsible for deaths in the past, and while this is a drastic example of the dangers, these knock offs still shouldn't be taken lightly. In this article, we discuss what you should be looking out for.
Post Views: 62
PrevPrevious
NextNext

Risk of electrocution and explosion

These are the most grave problems that these fake products have, and it’s nothing to joke about. They’re made with no quality checking processes, no safety or quality certification from regulatory agencies and no manufacturing safety rules.

Because of these lax manufacturing standards, they are more prone to explosions and shocks. Original chargers by name brands still have these issues, but in much, much smaller numbers since they go through rigorous testing and certifications processes.

Yes, something this small can kill you. / © ANDROIDPIT

For the same reasons listed above, your charger may overheat. And it it doesn’t catch fire itself, it may spark or heat up another object which will go up in flames or explode. Fake charger manufacturers aren’t concerned with the materials used, so don’t expect wiring or plastics that will stand up to the heat.

Risk of ruining your smartphone

If flames, death and destruction don’t worry you, what about damage to your smartphone? This can happen relatively easily, and it’s more likely to happen than other problems.

Quality problems in the charger can damage your smartphone. Real chargers come with a fuse inside that burns out in case of overload, preventing damage to the smartphone or sparks and fires. The amperage, voltage and current don’t matter without basic safety precautions, as your phone could still fry. So, trying to save money on a charger by getting a fake can end up costing you a smartphone in the end. Not worth it!

If it’s not an original charger and it says it’s fast charging, it’s a lie! / © NextPit

A counterfeit product is intended to cost the least possible amount to manufacture for the sake of generating a profit,  and so there is a good chance that it will not work as well as it should. This is the main characteristic of fake products. They might work, but it is very unlikely for them to work with the same quality or power as an original.

Fast charge is rare to find, and what ends up happening is that one of these will take longer than the original charger to get your smartphone to 100%. It could take twice as long to charge, wasting both time and electricity.

If it doesn’t work, you’ve got no one to complain to

This is a common problem, especially with car chargers. When they’re low quality, they’ll either not work or stop working much sooner than you’d expect. With no guarantee, you can’t complain to the manufacturer or the store you bought it from.

There are good alternatives to original chargers

There are reputable charger brands from all over the world / © ANDROIDPIT

Before readers start casting stones, let’s say it clearly. Although we’re against fake chargers, there are good non-original chargers out there. Cheap products have dubious quality, but there are great brands out there like Aukey, Anker, BlitzWold, Ugreen and Tronsmart. While these won’t have the same standards as originals, they’re way better than generic knockoff chargers.

How to make your phone battery last longer

Tips for spotting a fake charger

Yellowish color instead of white

Doesn’t do what it says on the package

Comes with poor packaging or none at all

Plastic seems badly made or put together

Cable is loose and doesn’t fit properly, or there’s no cable at all 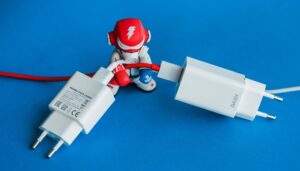