Tips for dramatically reducing your mobile data usage on Android

How much mobile data do you need?

There are certain data formats on the World Wide Web that unexpectedly cause higher data consumption. For example, animated GIFs are considered inefficient, which you might not initially expect. Not infrequently, it is more than a megabyte for a three-second animation. Even YouTube videos are more economical and should be expected to consume two to more than 10 megabytes per minute. For music, the consumption varies between one and five megabytes per minute, depending on the bit rate.

Android delivers control over your data consumption. Just hold your finger on the corresponding tile in the quick settings, and you’ll get to the consumption overview. For some manufacturers, you need to go into the Data Usage section in Settings.

In the consumption overview you can also set limits, have it give you warnings and limit background data. We will discuss this in detail later in the article.

There is another way to check your remaining data volume, and this may be somewhat more accurate. You can look directly at your carrier’s app. Practical tip: with many providers, you can put the current status as a widget on the start screen.

Set an upper limit in Android

Limit the consumption of individual apps

Set a data limit in the Android settings

This is done primarily via the settings menu of the smartphone. Here, you can see and manage your data consumption. First, set up a consumption cycle that is adapted to your contract and the monthly renewal of your data volume. You can also set a limit at which the mobile data is automatically deactivated or capped.

Only once you set a hard limit will the data consumption stop. / © NextPit

Force individual apps to save data

Here, you also have a list of the consumption of individual apps. Tap on one, and you’ll see in the following view how much the app consumed in the foreground or in the background. There are apps that secretly use your data volume in the background – if all else fails, you can stop it by limiting the background data here. But caution! This may cause some apps to stop working – especially Google apps and system apps.

Use stored videos and music on-the-go to save data, or use offline features of music and video streaming services.

Most music streaming providers offer an offline feature. This way, you can store your favorite songs on the smartphone and play them when you’re on-the-go. Alternatively, you can convert your CDs to MP3s and copy them to your internal memory or a MicroSD card and play them with a music player app.

Offline navigation in Android has become quite good. Google Maps will now automatically ask you if you want to keep your map excerpts offline for 30 days. You can now download and save maps to use later offline. This is an excellent way to reduce data consumption in the city you live in, for example. You learn how to do this by following our full guide at the link below.

How to use Google Maps offline

You can download and save multiple maps for offline use. / © ANDROIDPIT

Alternative apps for offline navigation are here from Nokia/Microsoft or Maps.me. They all pursue different approaches and are well-suited to navigation in the car.

Save data volume when surfing with Chrome’s compression feature

One of the many useful Chrome features is the ability to download compressed website data. You can enable this feature in the settings, almost at the very bottom. In our reviews, it has saved an average of 32 percent of our mobile data. This would equal, for example, 200 MB instead of 300 MB. This extra data volume is gladly accepted.

Compress everything with Opera Max

Opera Max is a compression app that helps you save data while Internet surfing. The app sends all data via its own VPN server and compresses the videos and photos on apps and websites. Unfortunately, this is associated with a visible loss of quality. In the app, you will be shown which apps on your phone have the greatest data savings potential.

With the current version, you can save money when streaming music and videos. Thanks to the integrated Rocket Optimizer, MP3s and MP4s are converted to AAC+ format. At a lower bit rate, a similar sound quality can be achieved. Videos streams, like Netflix or YouTube, can be compressed on request by Opera Max. Buffering times are thus shortened, but the quality is visibly lowered. In our review, a 10-minute YouTube video saved more than half of the data, so that only 14.7 MB were consumed, instead of 31.2 MB.

What do you do when nothing helps?

If you are struggling, you have to switch to one of the many free Wi-Fi networks. Or, if you have a dual-SIM smartphone, you can use a SIM card with a pure data plan (without a telephone option) and thus surf cheaply.

What are your tips? Have you tried any of these methods? 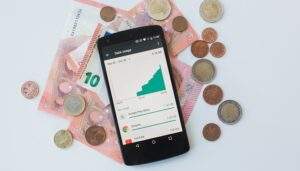