Information from Wabetainfo has revealed that the tech company is finally working on a reaction feature for its messages, years after other rivals and even messaging apps under WhatsApp’s parent company Meta (former Facebook) implemented similar abilities.

Finally, after a long time of waiting, WhatsApp seems to get a modern uplift with a series of features expected to roll out next year like custom stickers, better multi-device support, new desktop apps, and now, even emoji reactions for messages!

The feature has been requested by users for a long time since it is very popular in Facebook Messenger, Signal, Discord, Slack, and Instagram.

How to React to WhatsApp Messages

Although we are not aware of a release date, we know that WhatsApp will soon allow users to react to messages both in group chats and direct messages. Especially for group chats this feature will change the messaging game as multiple reactions to a single message will no longer clog the entire group chat.

Reacting to messages will work similarly to other platforms: by tapping and holding a message and selecting between the available reaction emojis. A bug in a previous beta version demonstrated the feature but it did not allow for any actual reactions. You will have to be careful though with the choice of emoji since you can only react to each message once.

Additionally, we know that the reactions will not be anonymous; users will be able to filter reactions by the emoji and see which ones individual users have selected.

How will the Reactions look?

The suspected emoji selections for reacts are no surprise. / © Wabetainfo

The upcoming reactions will use a series of predetermined emojis, balancing between the plethora of emojis from Messenger and the heart only likes from Instagram. For now, reactions will include the thumbs-up, heart, laughing, surprised, sad and prayer emoji but this is obviously prone to change.

Whilst the initial selection of emojis is not as broad as those from Messenger, which allows you to choose from all the available Facebook emojis, or Discord and Slack ones, which allow users to even create their own emojis and are fully customizable, it’s a welcome step forward and will cover the broader audience of the platform. 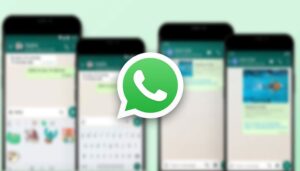