Pixel 3: how to get your hands on the new camera app now!

As soon as the two new Pixel smartphones are official, the first apps drawn by the devices appear. One of them is the completely redesigned camera app for Pixel 3 and 3 XL, which already brings some of the features to older Pixel smartphones. But don’t automatically expect the same photo results that you’d get from Google’s new models.

The biggest difference between the new and the old camera app can be seen at first glance. Google has screwed on the interface here, where you can now switch between the different camera modes with a lateral swipe gesture.

Google has completely reworked the interface of the camera app. / © Screenshots: AndroidPIT

At the right end of the menu, the More item now contains modes such as Photo Sphere, Slow Motion, AR-Stickers, Google Lens and the Settings menu. You also have to go into the settings to activate the RAW recording support. Afterwards, another button appears at the upper edge of the display, which one you select to save a photo, either as a JPEG or as a RAW file.

You should note here that the RAW images that are marked with a shutter symbol are not displayed in the preview with full resolution and are therefore blurred. But if you load them into a photo editing program, they can be used in full resolution. The pictures can be found in Google Photos in the folder labelled “Raw”.

RAW recordings are stored in a special folder. / © Screenshots: AndroidPIT

Not every feature will work

What also works is the new focus feature. Here you can set a new focus point for photos taken with the portrait mode. In addition, it is possible to hide colors in the background or foreground and set individual color accents. There is also the new panorama mode and the option to record sound together with pictures.

What doesn’t work is the Top Shot feature, where the Pixel 3 camera app uses the motion image function. So here, shots are taken from before and after pressing the shutter button, from which the user can then select the best one. Group Selfies also don’t work due to the lack of a wide-angle camera and the automatic shutter release is missing when smiling or making faces.

The latest version of the Pixel 3 camera APK can be found at APK-Mirror under this link:

The APK doesn’t seem to work on smartphones other than the Pixel phones, but it shouldn’t take long until the first developers adjust it for other smartphone models as well.

Are you sliding the new camera APK onto your Pixel smartphone? Write us your experiences in the comments. 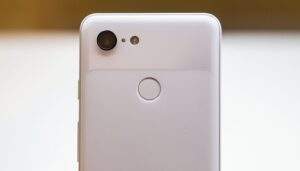