The LG G3 boasts a number of innovative software features. With the roll out of Android Lollipop, some of its original features changed or ceased to work, but there are plenty still left to discover, from greater accessibility to the ability to use multi-screen apps. Discover how to do these things and more with the help of our LG G3 tips and tricks.
Post Views: 53
PrevPrevious
NextNext

1. Take advantage of the Knock functionality

The LG G3 sports some tools that rely on your tapping skills to enable them. You can double tap the screen to turn the display on and off (although it only works if you tap an empty spot on the home screen when the display is active).

You can use a knock code to lock and unlock your device instead of a conventional pattern lock, and you can even wake the display of your device with a single tap.

To set things up, under the “General” tab in the Settings menu, go to Security > Lock Screen > Select screen lock. Select Knock Code and you’ll then be asked to create and confirm your Knock Code pattern. You’ll also be asked to set up a backup pin just in case you forget your code.

LG has taken a page out of the Samsung playbook with this feature: when enabled, Smart screen will keep your display lit up for as long as you’re looking at your device. It’s a handy feature if you’re reading or spending a long time looking at one thing in particular.

To make use of it, go to Settings > Display and check Smart screen.

3. Take screenshots and annotate them with QuickMemo+

You can take screenshots with just about every Android device, but LG’s QuickMemo+ function (or QMemo+) allows you to add handwritten notes to the screenshot. There are two ways you can start QuickMemo+: you can either access it from the icon in Quick Settings or by adding in the QuickMemo+ navigation button to your home screen.

If you’re looking to liven up your home screen or would like to see a more playful font used in your apps, here LG comes to the rescue as you can tailor text styles to suit your tastes.

To get started,  just go to Settings > Display > Font type. All you need to do then is select your preferred font type.

The font on the LG G3 can be changed in just a few simple steps. / © ANDROIDPIT

The LG G3 is a powerful smartphone with some great features, but let’s face it – it can be a bit of a handful. Luckily, the LG G3 comes with a one-handed operation feature that is specifically designed to alleviate this issue.

With one-handed operation enabled, you can adjust the alignment of the dialer, keyboard and lock screen, making it easier to use your smartphone with one hand.

To set this up, just go to Settings > General > One-handed operation. After you’ve done this, check the boxes for the features you’d like to enable and you’re good to go.

As we revealed in the Optimus UI comparison, you can move the G3’s navigation buttons to whatever you see fit. Do you want the home button on the left? How about the back button on the right?

No problem, you can change the arrangement of these capacitive buttons or even hide them when not in use by heading to Settings > Display > Home touch buttons > Button combination. From here, you can drag and drop the buttons at your will.

Customize the navigation buttons on the LG G3. / © ANDROIDPIT

These assignments can’t be modified, which is a shame, and the features are also limited if you have your G3 protected by a knock code, pin code or pattern code; if that’s the case, you’ll have to unlock the device before either app will start.

If the keyboard is taking up too much space or you need it to be a bit bigger, you can change the size of it as long as you’re holding your LG G3 in portrait mode.

Go to Settings > Language and Input > LG Keyboard. From there, you can make the desired changes to the keyboard height and layout. You can also choose to have the keyboard split apart when you hold the phone in landscape mode or enable one-handed operation mode.

A long-press on the back button will open the dual-window function and allow you to display a variety of system apps on the screen at the same time. Among these apps are the browser, maps, news and email.

Just drag and drop the two apps that you want to use to either the upper and lower half of the screen. The size ratio between the two displayed apps can also be adjusted by dragging the middle bar.

Smart cleaning is one of LG’s more distinctive features, as it reminds you to delete apps you don’t use and other data to free up space on your smartphone. It will also suggest you delete cache from apps, temporary Clip Tray files, and apps that haven’t been used after a certain amount of time. The notification interval and idle time period is by default set to 1 month, though both of these can be reduced or extended however you like.

You can find the Smart cleaning feature by going Settings > General > Smart cleaning and then just select the category you want to deal with – “Temporary files,” “Download folder” or “Idle apps.”

11. Personalize the contrast and appearance with color adjustment

In the Settings > General > Accessibility, you can find the option for Color adjustment. With this, you can change the look and contrast of the entire surface, including app icons.

Once the feature is activated, you can simply drag your finger across the screen and the entire interface will be changed to reflect the color you choose.

The LG G3 has great accessibility and color options. / © ANDROIDPIT

12. Get greater accessibility with Touch assistant

Key functions such as volume control, on / off, home screen, settings and back can be reached via an extra button that can be placed anywhere on your screen and accessed across all screens.

In order to enable this, head to Settings > General > Accessibility > Touch assistant. The button will now appear on your screen, and tapping on it will bring up a menu showing a bunch of basic functions.

13. Change the theme of the messaging app

If you’re not a big fan of the messaging app’s default theme, you can change it. Head to Settings within the messaging app and choose Conversation theme to change the background and the look of the speech bubbles. You can even use an image as a background if you want to.

Change the appearance of the messaging app on the LG G3 with different backgrounds and speech bubbles. / © ANDROIDPIT

If you don’t like a particular app icon, long-press on it and then let go, and a small paintbrush will appear at the top right. Tapping it will bring up an overview of different icons, which you can choose for a replacement.

Customize your app icons easily on the LG G3. / © ANDROIDPIT

This is just a glimpse into some of the customization possibilities that your LG G3 offers. While not every feature is exclusive to this device, there are still tons of tips and tricks that make the G3 unique. 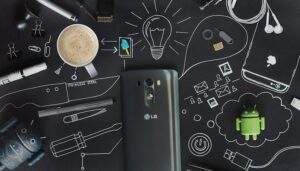