How to scan QR codes with an Android phone

QR codes are everywhere: these little pixelated squares appear on billboards and poster ads, in magazines and on product packaging. Unlocking their contents can share contact info or Wi-Fi passwords, or take you to the website for a film you’ve just seen the poster for. So how do you use them? Here’s how to scan QR codes with an Android phone.
Post Views: 47
PrevPrevious
NextNext

What are QR codes?

QR is an acronym for Quick Response. It’s a smarter version of the ubiquitous barcode, and it was originally developed in Japan for the automotive industry. Machines can read QR codes more quickly than barcodes, and QR codes can also store more data in less space.

A QR code, yesterday. The three squares help the scanner or camera orient the image. / © NextPit

If QR codes had stayed inside factories we probably wouldn’t care, but they’re used for all kinds of things now: coffee shop loyalty programs, e-tickets for sports and concerts, ‘find out more’ links on adverts or packaging, and sharing contact information.

For most of us, the main reason to use QR codes is to obtain a web link to find out more information about something or to get a password for a wireless network: scan the code and the information should appear in your web browser or connect you to the network. But how do you scan it? There are a couple of ways.

How to scan QR codes with an Android phone

There are a few different ways to scan QR codes on Android. On Pixel phones you are able to do so without downloading third party apps. The option is built-in directly into the default camera app. All you have to do is switch to Lens mode and point the camera at the QR code you want to scan. On Samsung smartphones, the Bixby Vision app can also be used as a QR code reader.

However, if your phone is neither a Pixel nor a Samsung, you don’t have to worry – if you have Google Assistant you should already have the Lens option too. It can be found via the camera icon when the Assistant is in use. If it’s not there, you can download the Google Lens app directly from the Play Store. It’s one of the best QR readers for Android and has some other cool functions such as identifying plants and animals or giving you information about nearby landmarks with AR overlays.

Google Lens is fast and reliable when it comes to scanning QR codes. / © NextPit

Get Google Lens on the Play Store.

Of course, third party apps are always an option too and this is the QR scanner app we’d recommend the most:

QR Code Reader is one of our favorite apps for scanning QR codes: it’s simple and free, works quickly, and doesn’t blast you with advertising (unlike many rival apps).

It’s also compatible with stacks of Android devices and versions: if you have Android 2.3.3 or later you’re good to go, provided, of course, that your device has a camera. If the code you’re scanning is designed to take you to a website, you’ll also need a data signal or wireless connection.

Scanning the code is automatic: just line it up inside the guide lines. / © Scan, Inc.

To scan a QR Code, all you need to do is load the app, start scanning and point your camera at the QR code. Line it up inside the guide arrows and that’s it: QR Code Reader recognises it and provides the appropriate information, carries out the appropriate task or, in the case of phone numbers and other contact information, asks you what action to take. It also records your scan history so you can look back at the codes you’ve been pointing your phone at.

No ads, no money. What’s in it for the developers? They hope you’ll like the app so much that you buy Scan, their US$4.99 ($1.99 at the time of writing due to a limited-time sale) scanner. It has the same basic features as QR Code Reader but adds support for scanning all popular barcode types (UPC, EAN and ISBN) to show you pricing, reviews and anything else relevant to the product(s) you scan (although you’ll need a reasonably good camera for barcode scanning).

Can I make my own QR codes?

Yes! There are stacks and stacks of code-creating Android apps, although going through the reviews it seems like they all have flaws. It’s probably easier to go to the Scan developers’ website where you can create QR codes for social media, Wi-Fi access, contact information and many more kinds of data for free in your web browser.

Are there any risks to scanning QR codes?

Actually, yes. A scam known as ‘attagging’ involves pasting new QR codes over existing ones, for example by pasting a label over the QR code on a poster. The new code could link to malicious software that might then access your camera or your personal data. In Russia, a QR code scam made phones send premium-rate texts at US$6 per text. Such malware is very, very unusual, but it does exist and has done for several years. 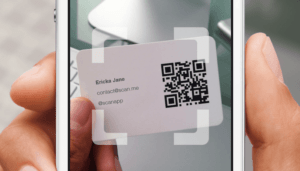