How to install iOS 13 on your iPhone now

Made official at WWDC 2019, iOS 13 is already available for download in a first beta version. Intended for developers, this version allows you to test all the newest features announced by Apple. However, this year, the procedure for installing it on your iPhone is a little different from previous years. Find out how to install iOS 13 on your iPhone below.
Post Views: 39
PrevPrevious
NextNext

First of all, it’s worth noting that if you don’t know what you are doing, you should avoid installing this version because it may be unstable and make your device difficult to use. Apple itself warns users of this danger:

Important note for Thrill Seekers: If you’re interested in living on the edge and trying out the great new features in iOS 13, we strongly advise waiting for the many bug fixes and refinements coming to the public beta next month.

Who can install this beta?

Not everyone can get the beta. Only iPhone 6s or higher, iPad Air 2 or higher, all iPad Pro models, iPad 5th generation or higher, and iPad Mini 4 or higher are compatible with iOS 13.

How to install iOS 13

To the surprise of regulars, Apple has changed the method for downloading the new iOS beta. Previously, it was possible to install the beta directly from your iPhone, iPad or iPod touch. This is no longer possible, as it is now necessary to use a Mac, since you must first download and install the beta of Xcode 11, the tool for creating applications. Then, you must open iTunes (the death of which was announced yesterday) to install iOS 13, which you will have previously downloaded.

An alternate method allows you to do without the Xcode 11 beta, but you need to download the macOS 10.15 Catalina beta. In this case too, a Mac is required. Simply plug in your iPhone, open the Finder and install iOS 13.

In both cases, we advise you to make a backup of your data, so that in case of a problem, it is possible to return to iOS 12.

This year, installing the iOS 13 beta is a more complicated task than in previous years. © Apple

Finally, please note that the public beta will be available in June, so you will need to register your device here and install the update OTA. 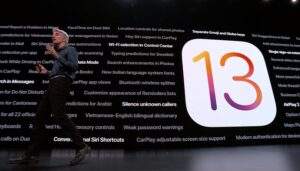