Here’s how to remove the Samsung UI from your smartphone

Android is an open source system. That means that third-party manufacturers can pretty much do whatever they want with it. An example of this is Samsung’s customized UI layer, One UI (formerly Samsung Experience and before that TouchWiz), which often finds itself the subject of heated debates - not everyone is a fan.
Post Views: 59
PrevPrevious
NextNext

All Samsung smartphones come with Samsung’s unique interface, whether it be TouchWiz, Samsung Experience, Grace UI, or the new One UI. Starting with the recalled Galaxy Note 7, a new interface design called Grace UX was introduced, although it has been through several name changes. With the Korean manufacturer’s device update to Android Nougat, this new design was expanded. The interface has changed a bit along the way, which is what we can see on devices such as the Galaxy S8. The Galaxy Note 9, Galaxy S10, S10 Plus, S10e, on the other hand, are shipped with the latest version of Samsung’s user interface – One UI.

However, not everyone likes this new user experience. If you have a Samsung smartphone but you’re just not feeling the interface, we can give you a hand with changing it.

Obviously, this won’t completely erase the Samsung UI from your device, but it will get rid of those annoying updates that the pre-installed apps (bloatware) constantly ask for and which continuously eat up your internal memory. We can get rid of the notifications and the apps that Samsung pre-installs.

You can begin by getting rid of the shortcut and widget, but to actually stop the app, you’ll need to go to Settings > Applications > Application manager, look for the offending app and select it.

Get rid of Touchwiz Setup 1

Once you’re in the app information:

This way, the app will stay in a kind of hibernation mode, it won’t update, and it will only take up the initial space it came with. If you want to turn it back on, all you need to do is go to the application manager again and under ‘disabled’, you’ll see all the apps you’ve turned off.

This is the most drastic change you can make without rooting your phone. If the icons or the high-contrast background of TouchWiz aren’t to your liking, you can always modify the look to make your Android experience a bit more bearable.

With a customized launcher, you can change the appearance of the desktop and icons. It simply requires you going to the Google Play Store and downloading one of the many available launchers. The most popular ones are Nova, Apex, and Microsoft Launcher. You can find a selection of the best launchers here.

The best launchers to customize the look of your Android

Get rid of Touchwiz Setup 2

Set the new launcher as the default on your Samsung device. / © NextPit

Head to the Google Play Store and install whichever you like most. The first time you open it, it will ask you which launcher you’d like to use. Choose the launcher you just installed and click on ‘always.’ If for some reason you want to go back to TouchWiz, you can change this in Settings > Default Apps > Home screen, choose your launcher and click on the home button.

Turn your phone into a Pocophone F1 with the official launcher

If you want to completely remove Samsung’s UI from your device, your only option is to flash your device with a new ROM that doesn’t have a Samsung’s fingerprints on it. This will void your warranty though, as the Knox counter will be set to zero. To flash your Samsung, the first thing you’ll need is Odin.

To erase Touchwiz or another Samsung UI from your phone, you’ll need a few things: first, install a custom recovery and then install the new ROM from the custom recovery. Some ROMs come pre-rooted by default, but for others it’s optional.

Modifying the software on a Samsung Galaxy S7 Edge. / © NextPit

How to root your Android: the complete guide

When the custom recovery is ready, you can start looking for a ROM without TouchWiz or any other Samsung UIs. In the XDA forum, you’ll find a lot of ROMS based on pure, stock Android (AOSP) that you can try out. The main thing to keep an eye on is how often it updates and user comments. If you’re not sure where to start, Lineage OS might be a good place. 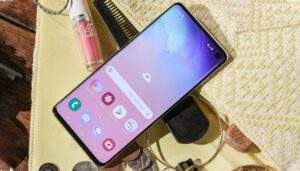