Android accessibility settings: 5 hidden options everyone can use

The magnification gestures accessibility option allows you to triple tap for a significant zoom. It can be disabled with the same triple tap.  If you tap and hold, however, you can temporarily magnify your screen and pan around. You just release to go back to normal. It’s a super useful feature once you start using it and it’s particularly great for those with vision impairment.

Magnification gestures let you triple tap to zoom in, even just to temporarily magnify. / © NextPit

How to activate night mode on Android

Text-to-Speech is probably the most well known of all accessibility features – you may even use it already. All you need to do is have the Google Text-to-Speech engine enabled and then download the language pack you want.

Text-to-Speech is a simple way to get through all the content you’ve saved for later reading, on the Pocket app for example. Which I never get around to otherwise. I simply hit the listen button on the top right above my article of choice (which looks like headphones) and let Google read the article to me while I prepare dinner.

You can use Google’s Text-to-Speech engine to read articles saved to Pocket. / © NextPit

Do you miss the Android days of old when many devices had a black UI background? Maybe the grey-white menus irritate your eyes even at the lowest screen brightness at night. If that’s the case – we have a solution for you. Simply go to the accessibility settings and check the box next to Invert colors (called Negative colors on some devices). Voila! You now have kind of a night mode for your device.

Many Android smartphones also offer other color options, such as correction mode for color blind people. High contrast text is another particularly useful one, even if you don’t suffer from any vision problems.

TalkBack is awesome, especially if your eyesight is as bad as mine or you’ve lost your glasses. You can even use this if your screen has issues, as long as your touchscreen is still responsive. Once you’ve enabled the option, whatever you tap, press or activate will be spoken aloud to you. Explore by Touch is the same thing under a different name. The additional settings for TalkBack are enormous and definitely worth checking out further.

TalkBack has a lot of customization options. / © NextPit

The Select to speak option (which can be found on some devices) is an even more simplified version of TalkBack. If enabled, if you will see a text bubble in the bottom right corner of your screen. Tapping it and selecting play will allow it to automatically start reading any text that’s on your screen.

Interaction control can also be found in the accessibility menu. It lets you turn your motion gestures and screen timeout settings on or off, but the coolest part is that on some Android smartphones you can block off specific areas of the screen from responding to touch input, like the status bar or notification shade, for example.

Check your particular device’s accessibility settings to see if you have these features listed under a different name. For example, on some LG devices Interaction Controls may be called ”Touch Control Areas,” so a little bit of exploration is definitely worthwhile. On HTC, as you can, see from the above screen shot, Switch Access also give a variety of options for people with motor impairments. 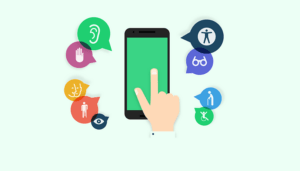