The Google Pixel is attracting a lot of attention and, once again, it's for all the wrong reasons. A number of Pixel users running Android Oreo have been reporting that they're getting notifications that their "mobile data has run out" even when it hasn't. Google is aware, but there's no fix yet.
Post Views: 43
PrevPrevious
NextNext

Google Pixel “mobile data has run out” problem on Oreo

For some Pixel users on Oreo, mobile data stops working randomly and the phone turns off all cellular data as if you’ve run out of your carrier data allowance for the month even when you haven’t. This is accompanied with a notification saying that “mobile data has run out.” Pixel devices are also cutting data access for users who have a plan which allows unlimited access to certain services, like WhatsApp, even after the main data allowance runs out. This issue is happening with in many countries, including Mexico, Nicaragua, Honduras, Indonesia, Romania and more.

Google Pixel “mobile data has run out” solution on Oreo

Google is aware and it’s already working on a fix, according to one employee. We don’t yet know when to expect it, though hopefully it won’t be long as Google says it’s a high priority. So, the only solution for now is to flash back to Android Nougat while you wait for an update to fix the problem, or just live without mobile data temporarily.

The Google Product Forum is the information hub for anything and everything to do with the Google Pixel and Pixel XL, and in recent months some users have been reporting catastrophic issues with the microphones on both of Google’s flagship devices. People posting on the forum have said that resorting to a factory reset doesn’t resolve this issue, but the fault hasn’t affected the camera app.

Google has confirmed that this is a hardware issue, so software updates will do nothing to resolve this new microphone problem. Google has said that they are now engaging in a more rigorous process during the general manufacturing process and when certifying refurbished phones, in order to ensure they no longer have this defect.

Happily, for those of you who have purchased a new Pixel or Pixel XL in the last month or so, your device shouldn’t be affected. If you are experiencing any issues, Google recommends you seek a replacement for the device or contact the retailer where you purchased it.

Some owners of the Google Pixel and Pixel have been experiencing issues with their device’s audio in the past few months. In particular, the sound quality of the speakers is bad when the volume is set to its three highest levels, making a scratching, crackling sound. The result is that certain applications’ audio becomes unusable. To see if your device is affected, turn your device up to its top three volume levels, and try playing music or other audio.

Do your speakers sound awful at high volume, too? Try a software update. / © NextPit

What was once believed to be a hardware problem has now been fixed by a software update from Google. The February 2017 monthly security updates for the Pixel and Pixel XL has brought a fix to the issues with crackling speakers at the highest volume settings. If you’re still experiencing the issue, try getting the latest updates to fix the problem.

After Google shipped out the February 2017 security update for the Pixel and Pixel XL , quite a few users noted that their devices were experiencing bluetooth connectivity issues. Users reported that their bluetooth connections were dropping as it seemed like bluetooth was being disabled at random. Some users also reported that after re-booting theirs phones, they couldn’t enable bluetooth over the shade shortcut, thus forcing them to go into the settings to change it there. While the security patch fixed the Pixel’s audio issues (mentioned above), it seems like it was also the cause for the bluetooth connectivity issues.

Google acknowledged this problem fairly quickly and has stated that their support team have already identified the issue. News has spread in the support forum that the issue has apparently been fixed.  Thankfully it seems like you don’t need to wait for an update as it was a server-side solution.

I just got word that Google has just finished putting a fix in place for this issue on our end – no downloads or updates to your devices or apps are needed.

We’d love to hear feedback from this group. If you have a chance to test your Bluetooth connection, please let us know how it goes.

While the Pixel had a few minor teething problems at launch, 9to5Google reports that Google’s actually been selling devices with a slightly revised hardware setup that could well include the fix for the microphone issue. According to one device owner, their handset has ‘Rev.B’ printed on its packaging.

That’s not exactly uncommon – small problems are often addressed with minor hardware tweaks post-launch – but unfortunately there’s no firm details on what could have been changed for these devices. We’ve asked Google to spill the beans and will update if we hear back.

Have you been experiencing issues with your Google Pixel or Pixel XL? Will you be contacting Google about getting a replacement? Let us know in the comments below. 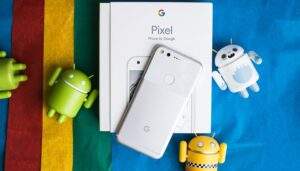