What is reverse wireless charging and which devices support it?

For several months we have been hearing more and more about so-called reverse wireless charging, an innovative feature included in some new smartphones that allows you to wirelessly charge other devices, including smartphones, smartwatches and other accessories. But how exactly does it work? And which devices support it?
Post Views: 47
PrevPrevious
NextNext

There are now two ways to charge your smartphone: via cable or wireless charging. The latter method in particular manages to transfer energy to the receiving device via electromagnetic induction. In recent months, however, we have heard more and more about reverse wireless charging, and many are wondering what the difference is with the classic wireless charging.

Let’s start by saying that there is no difference. Reverse wireless charging allows smartphones to turn into little charging stations, so they can be used to charge other devices without cables. This feature debuted on the Huawei Mate 20 Pro, followed shortly after by Samsung’s Galaxy S10 line and, once again, Huawei’s P30 Pro, but is expected to be present on most flagship smartphones in 2019.

How fast is reverse wireless charging?

Put simply: Reverse wireless charging is not that fast. It is, in fact, a low-power solution useful for emergency recharging, for example when a friend needs a little more charge and does not have a powerbank or a charger on hand. Or, it’s useful when you want to charge accessories, such as some wireless headsets (the Galaxy Buds or the new Apple AirPods, for example).

Despite the fact that fast charging (cable) technology has progressed a lot over the years (just think of the 50W Super VOOC from OPPO Find X Lamborghini Edition), the maximum currently achievable by Qi wireless recharging is 20W, although most wireless chargers on the market do not even exceed 10W. So, if the Super VOOC is able to charge a 3,000 mAh battery in 30 minutes, with a wireless charger you will get the same result in about 120 minutes.

41% battery life in 10 minutes? Welcome to the future!

Reverse wireless charging, on the other hand, does not have power standards, but we can confirm that both Huawei’s and Samsung’s are not so fast. The Mate 20 Pro can deliver up to 2.5W to 3W of output, while the Galaxy S10 can be charged up to 4W wirelessly in reverse. In addition, unlike a classic wireless charger, the source device will always have a power limit: its own battery.

Which smartphones have reverse wireless charging?

The first smartphone that can support reverse wireless charging technology and then charge other devices using the Qi standard is the Huawei Mate 20 Pro. This device, presented in October 2018, has a 4,200 mAh battery, so it’s enough to fully charge a pair of truly wireless headphones and reach the evening without any kind of problem.

Huawei Mate 20 Pro is the first device to have this technology. / © NextPit

The Chinese manufacturer has also passed on this functionality to its latest flagship presented at the end of March, the Huawei P30 Pro. Similar to the Mate 20 Pro in many ways, this device is renowned for its excellent photography, ranking as the undisputed king of smartphone cameras at the moment.

Why offer only one device at a time that can support reverse wireless charging? During the first Unpacked event in 2019, Samsung introduced three new smartphones in the Galaxy S10 family, making all three capable of charging other wireless devices. In addition, for users who have pre-ordered S10 or S10+, the South Korean manufacturer has given them the Galaxy Buds which, as we said before, can be recharged wirelessly.

Even P30 Pro and the entire Galaxy S10 family can charge smartphones and wireless accessories. / © NextPit

Which devices can I charge with reverse wireless charging?

There is no limit to what can be recharged through this technology. If your smartphone, headphones, mouse or any other accessory is compatible with the Qi wireless charging standard, it can safely receive power from devices equipped with reverse wireless charging. 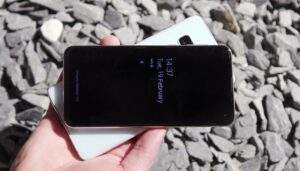