What is NFC? Everything you need to know about NFC technology

NFC is short for Near Field Communication.

Essentially, it’s a way for your phone to interact with something in close proximity. It operates within a radius of about 4 cm and provides a wireless connection between your device and another. This allows for two-way communication, with both devices involved being able to send and receive information.

AndroidPIT best ways to use nfc 2

NFC is widely used across the US, and Europe and chances are you have probably been using NFC for years now without even realizing it.

Do you know those three curved lines on your credit or debit card that allow you to make contactless payments just about everywhere these days? Well, that’s NFC. The first high street retail chain to introduce NFC was Eat, way back in 2008. Now, the same technology is available on most Android smartphones. This essentially means you can use NFC-based services for many practical, day-to-day applications.

NFC card payments, known as contactless payments, have been available for over a decade. / © Google

How does NFC work?

NFC transmits or receives data via radio waves. It’s an established standard of wireless communication.  It differs from Bluetooth in that it functions through electromagnetic induction. This means there can be a passive device, such as a poster or sticker, requiring no power source of its own that can transmit data when an active device, like your smartphone, comes into contact with it.

As an active NFC device, a smartphone can send and receive data over NFC. It encompasses the full range – three modes – of NFC:

How to use the NFC feature on your smartphone

If you happen to own a mid-range or high-end smartphone, chances are high it comes with the NFC feature. You will, however, need to make sure you have turned the feature on for it to work seamlessly. Once NFC is turned on, the manner in which you use it will depend on what you intend to do with it.

For example, if you wanted to connect your NFC-enabled smartphone to an NFC-enabled wireless speaker, all you need to do is tap your phone to a specific area on the speaker, and the connection is automatically established. That brings us to the various real-world use cases of NFC.

Let’s take a quick look at some of those.

What is NFC used for?

NFC has been around for more than a decade now, and for the same reason, some of the things which it could do aren’t relevant anymore.

For example, file transfers used to be a thing with NFC when it was new. In 2021, however, there are faster, simpler ways of peer-to-peer file transfers, and no one really uses NFC for that purpose anymore. Here are some areas where NFC continues to be used in 2021.

The most common way consumers use NFC is while making tap-to-go payments. Leading payment services, including Google Play, Apple Pay, and Samsung Pay, use NFC for cashless payments in several countries across the globe. In all of these payment services, all the user needs to do is to add their card number(s) to the app.

The next time you want to make a quick payment, all you need to do is to tap the NFC tag, and the payment should be done almost immediately.NFC payments are secure, and most of these services require that you add a PIN to complete a transaction.

NFC tags are small physical “tags” or “stickers” containing NFC chips that can be programmed to provide any kind of information to your smartphone. Typically, an NFC tag contains links to a web address, but it can also be set to perform certain actions with your smartphone, like turn on the Wi-Fi or turn down the ringer. Where NFC presents an advantage over current QR technology is that there is no need for a “scanner app”: the information is immediately available.

In theory, these tags could be embedded into just about anything. For example, an NFC tag could be used in a restaurant menu to make the most up-to-date version of it available immediately on your phone. All you would need to do is bring your smartphone into the proximity of the physical menu, and you could potentially browse more detailed information of certain menu items, like nutritional values or ingredients.

For personal use, NFC tags can also be set up to control devices from your phone, for example, scanning a tag with your phone could boot up your PC, or you could have a tag on your bedside table that switches your phone to night mode automatically.

If you’d like to experiment with NFC tags, there’s nothing to stop you from buying some NFC stickers and playing with the possibilities.

NFC tags can trigger predetermined actions on your smartphone. / © Sony

Connect with devices, wearables, and accessories

The past few years have seen a huge increase in the number of people using accessories that frequently connect to your smartphone for various purposes. For example, you might have a Bluetooth speaker and a smartwatch at home. You might be already aware how annoying it is sometimes to connect these devices to your smartphone using Bluetooth.

This is where NFC can come in handy. In case both the devices (your smartphone and the peripheral) support NFC, the connection can be established in seconds by a single tap. Some smartwatch and fitness ban models also support NFC for quick, hassle-free pairing.

A new use case for NFC, which saw its debut in 2020, lets users unlock car doors using just an NFC-enabled smartphone. The technology was announced by Apple in collaboration with BMW, and it made its debut with the 2021 BMW 5 series.

As you might have guessed, once this is set up and enabled, all you need to do to unlock your car would be to simply tap the door handle (which will have an embedded NFC chip), and the door will be unlocked without the need of a key.

The same principle can be used to unlock the doors of your home using just your smartphone or an NFC-enabled key.

Does my smartphone support NFC?

Most high-end and upper mid-range smartphones come with NFC support. However, several Asian manufacturers like Xiaomi, Oppo, and Huawei have stopped shipping smartphones with NFC capabilities because the market dynamics in countries where these brands are popular have seen an increased preference to QR codes over  NFC.

To find if your phone does support NFC, go to Settings > Connected devices > Connection Preferences (on Stock Android) and see if there’s an NFC option hiding in there.

Some older devices have a small NFC logo on their rear panels, but this is very uncommon to see in 2021. You can also type in NFC in the search bar within the settings menu and see if there are entries related to NFC on your phone.

Older smartphones used to proudly tout their NFC capabilities. This is not the case anymore / © NextPit

Is NFC safe, are there any disadvantages?

NFC communication happens over the air, and there is no real protection against eavesdropping and what is often referred to as man-in-the-middle attacks. However, due to the very close proximity required for NFC to work, these vulnerabilities are not such a big issue.

After all, a thief would have to be within centimeters of your device to skim your data via NFC. If you are using services like Google Pay, and Apple Pay, you can rest assured that your credit card number is never transmitted. Instead, an individual digital account number is used to identify your payment details.

There you have it. NFC provides the quickest way to set up connections between electronic devices. It is great for when you’re out of credit and need to make quick payments. It’s quick, easy, and bumping two phones together is fun (maybe not so much during a pandemic!)

But there are several drawbacks as well. We have listed a few below:

Not all smartphones support NFC.

NFC has not found widespread usage in Asian markets where QR codes are still popular.

NFC chips are not all located in the same place, resulting in some exploratory rubbing between devices.

NFC is too slow for peer to peer file transfers, and newer, faster methods are now available.

Do you use NFC on your smartphone? What uses have you found for it? Let us know! 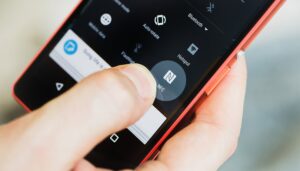