Fire alarms & doorbells: How to enable sound detection on your smartphone

Our Android and iOS smartphones do offer a slew of useful features that enrich our lives. Some of them can actually save your life, but many people are not even aware of such features. Noise detection is one such feature that can be useful not only for those who have some form of hearing loss. Here is how you can enable these sound notifications on your Android or iOS-powered smartphone.
Post Views: 54
Share on facebook
Share on twitter
Share on pinterest
Share on email
Share on whatsapp
Share on skype
Share on linkedin
PrevPrevious
NextNext

According to the WHO, over 460 million people worldwide suffer from hearing-related disabilities, which makes up slightly more than five percent of the world’s population. This can have a dramatic impact on their ability to participate in society ‘normally’, but it can also threaten their own lives. For instance, they are unable to hear the sound of a fire alarm and hence, lose precious time in escaping from the inferno.

NextPit’s collection of How To articles

Google has addressed this problem by expanding its Live Transcription app accordingly. Anyone who downloads the Live Transcribe & Sound Notifications app in the Google Play Store, will not only receive live transcription of 80 languages in real-time, but also receives notifications of surrounding sound – a feature that has been around since the end of 2020. Apple was even faster than Google, introducing sound detection in the summer of 2020 with the introduction of iOS 14.

How does sound notifications work?

Those who enable Sound Notifications on their Android smartphone or activate the feature in iOS can be notified of important and critical noises wherever they are via push notifications. This encompasses a wide variety of sounds like knocks on the door, the ringing of the doorbell, beeping home appliances, smoke alarms, barking dogs, crying babies, running water, and others.

If such a sound is detected by the AI from the smartphone mic, you’ll receive a push notification. In addition, those who are rocking to Android will also feel their smartphone vibrate with a flashing camera light as additional failsafe measures.

It works offline in both cases, so you don’t have to worry about every noise detected in your home ending up being stored on Google’s or Apple’s servers. Do bear in mind that neither Google Assistant nor Siri can be used while the feature is enabled, and your battery usage will increase as a result of enabling this feature.

To enable sound notifications on Android

In Settings, search for Accessibility.

Select Sound Notifications. Bear in mind that this option might be named differently on smartphones from different manufacturers. On my other Samsung handset, it was located under the “Installed services” sub-menu.

When launching Sound Notifications for the very first time, enable it by selecting Turn On at the bottom right-hand corner.

At the next splash screen, select OK, and your smartphone will begin to listen out for any potentially alarming sounds in the background to alert you.

You can access the sound notifications via the operating aids / © NextPit

How to use sound notifications

You can run a short demo in advance to test the feature. I tried the activated service with running water, some knocks on the door, and the ringing of my doorbell. I actually wanted to try out the smoke detector as well, but torching my pad seemed a tad excessive for an Android tutorial.

As long as the sound notifications are active, you will have the option in the app’s settings to select the sounds that you actually want to be notified of when they are detected. It is there where you can also separately set the different priorities of the sounds, and whether the camera flash and/or the vibration alarm should be activated. If you own an Android smartwatch with Wear OS, your timepiece will also receive a notification.

Google has a few tips that you should consider so that the function also detects the desired sounds as reliably as possible:

Position your smartphone in the middle of the room in which sounds are to be detected.

Do not block the smartphone with other objects.

Make sure that other noise sources in your home are quiet, including the TV.

Noise notifications are always active and may increase battery consumption, so make sure you charge your smartphone daily.

As soon as a noise is detected, you will also be able to see it in the timeline / © NextPit

For Apple users, the whole story is even more straightforward, because noise detection has been implemented directly into the system with iOS 14 and can be activated there in a jiffy. This means as soon as the desired sounds have been selected, the iPhone will listen closely. All of it happens locally and hence, there will be no exchange of information on the cloud.

A push message and vibration will indicate that a sound has been detected. Of course, Apple also supports the Apple Watch with noise detection, so incoming alerts will show up there as well.

To get the feature working on your iPhone, follow these steps:

Activate the sounds you want the iPhone to detect.

On the iPhone, the function is easily activated / © NextPit

As I mentioned, the function was surprisingly reliable when I tried it out and is thus a great relief for the deaf or hard of hearing. However, sound notifications can also be a great help if you are sitting on the couch with headphones, for example, and still want to make sure that you are able to hear whenever someone rings the doorbell.

Android 12 developer beta: These are some of the best features

iOS 14.5 update tracker: Is your iPhone getting the big privacy update?

I’m really excited about this feature, and about Google and Apple’s efforts to consider people whose physical impairments normally place them disadvantaged, while providing them with additional security and convenience via an app like this.

You are welcome to tell me if you share my opinion on this matter and if you have used the application yourself to great effect. You are also welcome to share in the comments about other features that you think deserve more attention. 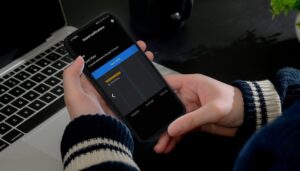