What is HDR and when should I use it on my smartphone?

HDR - these three little letters are present in many smartphone camera applications, but you might be clueless as to what they mean. If you're still in the dark on what HDR is, or just want to learn about when is best to use it, read on.
Post Views: 40
PrevPrevious
NextNext

So, what does HDR stand for? High-dynamic-range. In photo terms, dynamic range is the difference between the lightest and darkest elements of an image. HDR is a process which increases this dynamic range beyond what could otherwise be captured by your smartphone lens. It can be used to create either accurate representations of what you can see with your eyes, or more artsy shots that create a high-definition feel to landscapes.

The HDR mode on the Huawei P10 settings. / © NextPit

Though the ultimate goal of HDR is to create more impressive pictures, it’s not a feature that should be used for every single photograph. It depends on what you are shooting. Below, we’ve highlighted the best uses for HDR, how it works in practice and some example of HDR vs non HDR.

How does HDR work?

When you take a photo with HDR enabled, the camera captures several images in quick succession with different exposure values. The smartphone camera software then combines these images into a single photo which maintains detail from the darkest and lightest regions.

Before this functionality found its way to smartphone cameras, you had to capture three photos (with your camera of choice), transfer them to a PC, open them in Photoshop or something similar and use the HDR software function to combine the three images, highlighting the best parts of each, to achieve the same effect.

On the right, you see images with high and low exposure values; on the left, these two photos combined with HDR / Wikipedia

Thankfully, smartphone manufacturers have adapted HDR to their devices’ camera software so that, when activated, the phone does all of this work automatically. Because the software is essentially combining several images to create your final shot, HDR works best with static shots and a steady hand.

When should you use HDR?

There isn’t really a single best way to use HDR; most often it comes down to what you want to achieve from a photo. That said, below are some tips for some of the more common places where HDR is employed to capture better images.

Lighting is one of the most important aspects of a good photo, but outdoors, sunlight can cause too much contrast. HDR can balance these discrepancies so there are fewer parts of bright white or dark black. Look at the two photos below to see how the detail in the sky becomes more visible with HDR enabled.

If your photo is too dark – or too dark in specific areas – HDR can be used to raise the overall level of brightness. It can’t achieve miracles: if there is no light in a particular environment then HDR can’t manufacturer it, but since it works on the basis of taking the lightest and darkest elements of a picture and combining them, HDR photos have a good chance of looking better.

When should you not use HDR?

When you or other things are moving

Because HDR takes three photos, if something moves between one or two of the shots, the final image can appear blurry: this is also why photos take a little longer to process when using HDR. Keep yourself steady and try to take photos of still subjects.

Some photos look better with strong contrast between the light and dark areas. Using HDR will reduce this contrast, so the effect is less pronounced. If that’s not what you want from the final image, don’t do it.

HDR can certainly bring some vibrancy to otherwise lifeless colors in a scene. But if you’re dealing with colors that are already very much alive, HDR can make them look garish. Be careful not to overdo the color saturation.

Another example of a scene without HDR. / © NextPit

How do I know if my phone has HDR?

Almost every current smartphone has an HDR setting in its system camera app, so don’t be in a hurry to download HDR camera apps from Google Play just yet. To make use of HDR, most of the time you simply need to enable it in your camera settings. How to do so will depend on your smartphone manufacturer. However, you will usually find the HDR option in one of the corners of the screen when the camera app is launched. If it’s crossed out, it means it’s disabled. Simply tap it to enable it. On Samsung phones with One UI, on the other hand, you will find an option to apply HDR only when needed in the camera settings.

On some smartphones, however, you need to set your phone’s camera app to Manual mode rather than Automatic to take advantaged of HDR. Finally, if your smartphone doesn’t come with HDR, there are a number of HDR camera apps available in the Google Play Store, which offer varying results.

What is HDR+ and how can I get it?

Since its launch, Google’s Pixel 3 has been widely recognized as the camera king of the Android world. But what is it that makes the Pixel 3 camera so impressive? The secret lies in the software and, in particular, its HDR+ technology. It has been available on Pixel devices for a while, but has improved significantly on the 3rd generation. HDR+ is like HDR on steroids. Not only does it increase the dynamic range but it also reduces noise and improves colors at the same time. The Pixel’s camera app does this by taking a quick burst of shot when you take a picture before merging them to create an image built from all of the best bits. The results are impressive!

Because this trick relies on software and not hardware, it’s possible to use HDR+ on Android smartphones that are not made by Google as well. If you want to take pictures like the Pixel 3 does on a Samsung, OnePlus or Xiaomi phone, take a look at our guide to sideloading the Google camera app.

The best tip for using HDR for photos is simply to take a picture of the same scene with and without it, and then see what appeals to you most. It’s quick, easy and will give you a better idea of what can be achieved with this setting. Just remember to keep a steady hand when you do it. Over time, you will train your eye and learn to spot scenes that will be better suited to HDR mode or not. 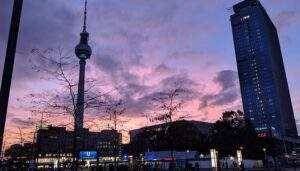