How to change your Apple Watch band

It doesn’t matter whether you own a first generation Apple Watch or a Series 2, 3 or 4. As long as the sizes are compatible, you’ll be able to quickly and easily change the band for another. Essentially, there are two sizes when it comes to Apple Watch bands. Bands that are for 38mm and 40mm cases are compatible with each other. Bands for the larger cases, which come in at 42mm and 44mm, can also be mixed and matched in the same way.

How to remove your Apple Watch band

It’s always a good idea to remove your watch band over a flat surface or on your lap whilst sitting on the sofa or something similar. The last thing you want to do is drop the watch case whilst fiddling with the band.

You want your watch band to be open when you do the next part, so take it off your wrist and undo the latch.

Hold down the band release button and, whilst keeping it pressed, slide the band to one side to remove it.

Hold the quick release button and slide the band out. / © Apple

The process is a little bit different for link bracelets, as they must be separated into two parts before they can be removed. To do this, fold in the butterfly closure one side at a time until you hear a click. Then, press one of the quick release buttons on the inside of the bracelets (the exact one doesn’t matter) and hold it down to separate the band into two parts. From there, you can use the band release button to slide out the band exactly as described above.

First, separate the band into two, then slide it out. / © Apple

Finally, we come to the Milanese Loop. It was redesigned by Apple in 2018 to allow for the sliding of the magnetic closure through the band connector. You can see how it works in the image below, but beware that bands bought before the 2018 redesign won’t slide through the lug.

Did you find this article useful for changing your Apple Watch band? If you have a better method, let us know in the comments below. 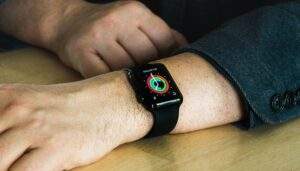