RAM, ROM and internal memory: understanding the difference is key

RAM stands for Random Access Memory. RAM is volatile, i.e. it does not store information like a memory card, it is temporary and all information contained within is lost when you turn off the power.

The term RAM has become more common in recent years and is used to refer to the physical modules used as primary memory. Normally only temporary information is kept in the RAM that your smartphone needs at a certain time, such as the operating system or open apps (even in the background) that are loaded into your RAM when your start up your device. RAM affects how much multitasking you can do on a device. The more RAM, the more temporary memory your phone has to juggle data.

This is what a RAM memory bar for PC looks like. / © NextPit

ROM is a special type of RAM. The acronym stands for Read Only Memory. This is a type of non-volatile memory, i.e. the data remains even in the event of a power failure. Access to all memory cells takes the same time (unlike with hard drives), which is why OS data is usually stored inside ROM memories to ensure a quick boot and to prevent changes by users. However, the ROM content may be altered in special cases.

DVDs or CDs are an example of ROM memories that cannot be updated, whilst a console has a ROM memory that can be updated.

The ROM in older smartphones used to contain the system partitions of Android (system, vendors, for example) to prevent users from deleting or editing files within it. That’s where custom ROMs got its name, because they were loaded into the read-only memory of smartphones.

Even today, there is a tendency to still call the system partitions of a smartphone by this name, despite the fact that, technically, the memory in which these partitions is now found is not ROM type.

The definition of ROM is therefore different from the use in the smartphone market.

Have you ever used a custom ROM? / © NextPit

The internal memory of a smartphone can either be eMMC (embedded MultiMediaController) or UFS (Universal Flash Storage). It can be expanded via a microSD in some cases and contains user data such as photos, videos, music, documents and app data. It is a permanent memory foam, and won’t be lost when you turn off your device.

On smartphones, the use of ROM has been replaced by dedicated partitions in the internal memory (eMMC or UFS) set to read-only mode via software.

Some manufacturers allow you to expand your internal memory, others don’t. / © NextPit

Be careful not to confuse your memory

Sometimes, for convenience, we talk about the memory of a smartphone with terms such as “X”GB of RAM and “YY”GB of ROM. Theoretically, this is wrong. You should say “X”GB RAM and “YY”GB of internal memory of which some GBs are reserved for the system. The term ROM, in this case, is inaccurate because Android system partitions reside in the same eMMC or UFS chip as the internal memory (which can be read or written freely) but the former is set to read-only via software. To recap:

RAM is useful for your smartphone to load the operating system and all the programs and apps you use, to improve multitasking and app switching speed

In the field of smartphones, ROM indicates the storage area reserved for some system partitions set to read-only mode

The internal memory is the one where you can store all of your personal content, the more space there is more photos, videos and apps you can hold on your smartphone

I hope the article has cleared up some of the doubt for you regarding memory on your smartphone. If you have any questions, let us know in the comments below and we’ll do our best to answer them! 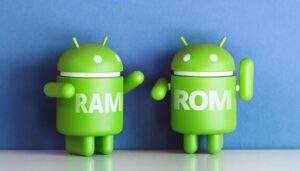