Learn guitar with apps: the best on Android and iOS

Free or paid apps and services?

Guitar tuition via face-to-face lessons with an instructor can be expensive, and there are plenty of ways to learn the instrument on your own without paying a penny. However, you generally get what you pay for in this world and some of the apps of this list require a subscription service to be able to access all of the lesson content and features.

In contrast to Gibson, which has struggled with bankruptcy amid falling sales, Fender has been traveling in the opposite direction. The legendary guitar brand revamped its line, filling it with high-quality but affordable instruments. The second part of this strategy to get more people playing the guitar is Fender Play, its own online learning tool and app.

Fender Play is the slickest product in terms of getting digital guitar lessons on your smartphone or tablet. Lessons are delivered by Fender pros and the production levels are top-notch. The system is based around songs, so you can skip all the boring repetition and scales that often come early on in traditional guitar courses. You also get tablature (a simple and easy-to-read version of sheet music for the guitar) to make your life a little easier. The library of songs is already impressive and continues to grow.

The only minor downside to Fender Play is that, due to the fact it is clearly targeted at those buying guitars for the first time, there is little lesson content for intermediate or advanced players. Fender Play will not take your skills to the next level if you are already accomplished at reading tab and learning your favorite songs, but for everyone yet to get to that level, it’s an excellent service.

Fender Play costs $9.99 monthly or $89.99 for an annual subscription. In the UK, those prices are identical in the Queen’s English pounds. There is a three-month free trial available too. Fender has been promoting its Play service aggressively, and you’ll often get six months free when you buy a new instrument directly from the manufacturer. You also get 10 percent off guitars, amps, and gear when you become a Fender Play subscriber, so you can save a few quid if you decide to add an amp or effects pedal to your setup further down the line.

You can download the Fender Play app from Google Play Store or the Apple App Store.

If you’ve ever done any Googling around online guitar learning tools, Yousician will already be on your radar. Yousician takes a slightly different approach to Fender and the app is much more gamified. The concept is similar to that of the music rhythm games that had their heyday in the mid-00s on home video game consoles. Unlike Guitar Hero and Rock Band, however, you’ll use a real guitar as your ‘input device’ with Yousician. Imagine an app-based version of Rocksmith and you get the idea.

Quick note: Rocksmith is also a superb guitar learning game for PS4 but I left it off of this list as it requires a video game console and television, plus an electric guitar, before you can start learning. However, I recommend the Riff Repeater account on YouTube, which uploads full songs you can follow along with at home if you want to learn songs fro Rocksmith.

The interface is reminiscent of the above-mentioned video games but the app uses the microphone built into your smartphone or tablet to track the notes and chords you play. There’s also a points-based system to encourage you to practice songs for better accuracy and a better score. Everything is color-coded to help beginners know where to place their fingers on certain chords – something you don’t get from tablature – and a tuner is also included.

Yousician costs $9.99 a month is you take a yearly subscription or $19.99 a month if you want the option to cancel at any time. There is also a 30-day free trial before you have to commit.

You can the Yousician app from the Google Play Store or the Apple App Store.

Amped, like Yousician, is a gamified guitar learning app. What makes this service unique is that it uses augmented reality to transpose what you play in real-time and play it back to you through headphones. This means you can experience different amps and effects without having to own thousands of dollars worth of gear – you can do this through an audio interface on your PC or Mac also, but it requires a little more technical knowledge to set up and get the sounds you want – and allows you to play along to songs that are drenched in reverb, distortion, or delay and have your guitar sound just like the song you are trying to replicate.

The interface is not as slick and professional as Yousician or Fender Play, but for bedroom players who want to play with headphones, or for those who are learning on an acoustic and want to feel like they are playing an electric with effects, Amped is a good solution. An annual subscription costs $87.99, or you can pay $14.99 monthly.

You can download Amped from the official website. The app is not currently available on the Google Play Store, but an Android version is in the works and coming soon. We’ll keep you posted.

Justin Sandercoe is one of YouTube’s celebrity guitar teachers. The Tasmania-born professional musician is now based in the UK and has been churning out guitar lessons online since 2001. Sandercoe offers a wide range of guitar learning materials from printed books to online lessons. Now, under his brand JustinGuitar, Sandercoe has several apps on both the Android and iOS ecosystems.

What you are really getting when you opt for JustinGuitar is the experience and knowledge of a seasoned pro-teacher. Unlike Fender Play, which uses lots of teachers, JustinGuitar gives you more of a one-to-one learning experience. Having a single teacher with a single teaching philosophy can be beneficial and, depending on your learning style, will prove to be more effective over time that switching and changing between multiple instructors.

The JustinGuitar beginner song app is a good place to start for those who want to pick up the guitar and start playing music right away. It’s designed to be a companion to Sandercoe’s beginner course, but you can download it and learn a couple of songs without having to go all-in on the full course. Justin also has a ton of content on YouTube that you can access for free, but hey, it’s nice to support creators from time to time.

You can download the JustinGuitar app on the Google Play Store or the Apple App Store.

For the final app on this list, I’d like to steer you towards a learning tool that is a little different from the others. Whilst building up muscle memory and dexterity to fret and play notes and chords is probably the single biggest challenge when you first start learning to play the guitar, it’s hugely important not to forget the theoretical side of playing a musical instrument. So many players can learn songs and play them accurately, but months later will forget them completely unless they are consistently reinforced. One of the reasons for this is that they didn’t really know what they were playing when they learned it.

Fret Trainer is an app that helps you learn every note on a guitar’s fretboard. Not only will this knowledge help you further down the line when you start to play solos and improvise lead parts and need to stay in the key of the song, but it can help you identify chords further down the neck by spotting the root note. This is not beginner knowledge by any means, but the earlier you learn it on your guitar playing journey, the easier you will find so many other aspects of mastering the instrument.

Fret Trainer is essentially a game. It will give you a fretted string on the guitar and you have to identify which note it is. There are several different formats and inversions of this game, such as identifying the target note from a multiple choice of three notes, but the premise is essentially the same for each game mode. The emphasis here is on speed. Master this game and you will be able to quickly and easily identify any note, on any string of your guitar. 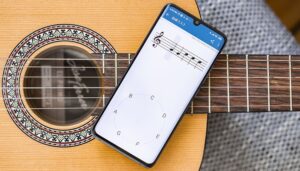