ISO sensitivity and dual ISO in smartphones: Are they important?

ISO 409,600 - that's what Huawei used to advertise with fervour for the P30 Pro and P40 Pro. At the same time, some professional DSLRs, which are several times more expensive that the handsets, "only" achieve ISO 102,400. So do Huawei's smartphones deliver four times the performance in night shots? And is ISO sensitivity that important for smartphones? Spoiler alert: No! There may be just one exception.
Post Views: 44
PrevPrevious
NextNext

What is ISO sensitivity anyway?

First, a little back story. ISO sensitivity dates back to the days of analogue photography. A layer of silver halide crystals was applied to the film base material. Light then transforms the sensitive silver compounds into elemental silver, and thus impresses the corresponding image areas on the film.

The larger these crystals are on the film, the more sensitive they were to light – and therefore better suited for low light conditions. However, larger crystals also meant lower resolution. The images end up with a coarse, grainy look. You have surely seen this before with old analogue photos.

Before international standardisation was introduced to photography, there were all kinds of names and units for the sensitivity of a film, for example ASA, DIN, or GOST.

Before we come to the ISO sensitivity of a smartphone, here is one more hint: We have made it our business to explain all the details about your smartphone camera to you:

Exmor, Isocell & Co: Why smartphone image sensors are so important!

Smartphone camera aperture guide: What does F1.7 actually do?

What is ISO sensitivity in mobile phones?

The age of digital cameras has swapped analogue film grain for silicon pixels. The light-sensitive material converts incoming light particles into voltage. The more light, the higher the voltage. In CMOS sensors, this analogue signal first runs through an analogue amplifier.

The ISO sensitivity of the sensor now depends on the pixels themselves as well as the gain of this analogue hardware amplifier. And just as with the analogue film grain on the carrier material, there is no way in current digital photography to exchange the “digital film grain” and change the ISO sensitivity of the sensor. We will show that there is an exception to that rule later.

While films of different sensitivities could still be used with analogue cameras, it is no longer possible to change the sensor these days. Even though Ricoh once had big dreams with the GXR here. / © NextPit

After the first analogue amplifier, our image signal now goes into an analogue-to-digital converter, which – as the name suggests – digitises the signal. From here on, the magic of computational photography takes effect and combines the image information with that of other photos, reduces noise, works on the white balance, brightens dark areas while darkening brightly lit areas, and so on. The result then ends up in the memory of your smartphone as a JPEG file.

“But I can adjust the ISO sensitivity in Pro mode”, I hear you say. True, but setting the ISO value as you know it from the manual mode of your smartphone or even your SLR camera doesn’t change the sensitivity of the sensor itself. This ISO sensitivity changes – simply said – only the gain, i.e. the brightness setting in the image processing behind the analogue-digital converter of your image sensor. So this happens only after the photo has actually been taken.

An insanely high sensitivity such as ISO 409,600 only means one thing: the manufacturer has allowed a high degree of brightness amplification by the software, which in this order of magnitude is already doubtful in its implementation in full format cameras. Half a million ISO for smartphones? Not very useful at all.

And this is exactly the answer on why the Canon EOS 5D Mark IV is “only” capable of hitting ISO 102,400 while the Huawei P40 Pro manages to hit a whopping ISO 409,600. First of all, Canon’s marketing department is less brazen and secondly, it addresses a target group that is more camera-savvy and, pardon my French, can’t be fooled into any silly claims.

Huawei’s Pro models from the P-series have great cameras, no question about it. But the manufacturer ought to do better in advertising than throw around insanely high sensitivity levels / © NextPit

With the Huawei P40 Pro, ISO 409,600 can actually be selected manually in Pro mode. RAW images, however, are only available up to ISO 6400, which does seem to indicate some software trickery here (which, by the way, is basically a completely legitimate maneuver) that somehow might deliver an ISO 409,600 equivalent. But is it still possible to call this “ISO” and advertise it as such?

Modern smartphones usually don’t just take one picture when you press the shutter release button. Especially when it comes to high-contrast motifs or poor lighting conditions, where sometimes more than a dozen photos actually make up a single shot. In the end, it doesn’t matter to the user which gain is set somewhere between the analogue-to-digital converter and JPEG compressor. The main thing that the user wants is a lovely photo that is noise-free, and ISO doesn’t matter. In other words, the ends justify the means.

And above all: ISO sensitivity is a measure of a certain level of “light output”. It doesn’t say anything about image quality, but at best it says something about the manufacturer’s confidence that the results at the maximum ISO equivalent value are somehow still good enough for the customer. In fact, the correlation between the highest ISO value in the spec sheet and the image quality in low light is exactly this: zero.

What is dual ISO sensitivity?

As I said: Whether we are talking about analogue or digital film, there is always a “fixed” sensitivity. With one exception though: because some, so-called dual-ISO sensors actually have two different hardware sensitivities. The manufacturers achieve this by throwing in an extra analogue gain loop in the sensor before the analogue-to-digital converter.

As a result, even for professional camera buffs, there are not very intuitive developments regarding image quality at different ISO values. However, with smartphones, there is great potential to take the thinking away from the user and cleverly exploit the changes in the dynamic range of highlights and shadows for a higher dynamic range.

A dual ISO sensor is available in the BlackMagic Pocket Cinema 4K. Above ISO 1000, the camera switches to the higher hardware ISO value / © NextPit

Blackmagic is very transparent with the dynamic range of their Pocket Cinema 4K. From ISO 1000 onwards, the camera switches from low to high sensitivity. The diagram provided by the manufacturer shows that adjusting the ISO values within the low or high setting does not shift the dynamic range, but only the grey point (in the diagram, it is depicted as the transition between pale and dark yellow). This ultimately means only a redistribution of the image information, while the dynamic range itself remains constant.

This dual-ISO option is now deemed as something exciting and counterintuitive at the same time. ISO 1000 is better suited to the Blackmagic Pocket Cinema 4K for capturing subjects with lots of bright detail. You can see this by the fact that the brighter spectrum above the 18 percent neutral gray point simply contains far more information. As a result, a detailed rendition of bright image parts is much better at ISO 1000 with 6.8 versus 3.5 light stops at ISO 100.

The Oppo Find X2 Pro has a dual ISO sensor! Unfortunately, we were unable to determine in the test whether the IMX689 really has an edge over the competition. / © NextPit

At the same time, we can also see from the diagram that ISO 100 is actually much better for night scenes, or for low-key shots where the scene is predominantly composed of dark areas. Since ISO 100 (film sets excluded) is usually impractical for low-key shots, the higher sensitivity of a dual ISO sensor is an exciting option to have here – the gray point in the dynamic range suddenly jumps up again within the brightness range.

What we generally understand as ISO sensitivity comes from a very limp comparison to analogue photography, which is however losing more and more of its substance. In the age of Computational Photography, ISO sensitivity has similar relevance as a choke in a Tesla Model 3.

To cut a long story short: While it has always been of little consequence for the camera quality, you can now actually forget about ISO sensitivity on smartphones during these days where computational photography reigns supreme. It really says nothing about how well a particular camera works in low light. 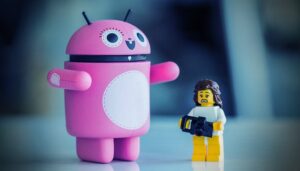