How to use WhatsApp with multiple devices simultaneously?

Using WhatsApp across several devices (such as on your smartphone and tablet) remains a complicated affair, even in 2021. However, the instant messaging application does offer a degree of flexibility in its last beta with the introduction of the multi-device function.

Multi-device WhatsApp: What is it, and what is it for?

The multi-device beta of WhatsApp allows you to use it on the web, macOS, Windows, or even the Portal version of the app on up to four additional devices without having to remain logged in on your primary smartphone.

In essence, it is simply a question of connecting several devices such as a PC or a tablet to your WhatsApp account via WhatsApp Web or Desktop. The only difference? Your sessions will not expire if your primary smartphone closes WhatsApp or is disconnected from the app.

This feature can come in handy if your primary smartphone runs out of battery or you inadvertently close WhatsApp.

How do I activate the multi-device function on WhatsApp?

You can add up to 4 additional devices apart from your primary smartphone if you have the function available in beta. This means having up to 5 devices simultaneously using the same account. In order to activate the multi-device function on WhatsApp:

Select Multi-device beta. If this option does not appear, your account does not yet offer this feature.

whatsapp how to multi device

There you have it, you have activated the multi-device function. The process is exactly the same on iOS as it is on Android.

How does multi-device work on WhatsApp?

Once activated, the multi-device function works exactly the same manner as connecting to WhatsApp Web on a PC or tablet device.

The only main difference is this: you do not need to remain signed in on your primary smartphone in order to continue using WhatsApp on your other devices. Previously, when you log out or close WhatsApp, both the web and desktop sessions will also expire. This is no longer the case here.

Scan the QR code displayed on the screen of your PC or tablet.

how to use whatsapp web on pc

Just connect your companion devices via WhatsApp Web, the method has not changed / © NextPit

Finally, as this is a beta, WhatsApp specified in its official FAQ that some features are not supported such as:

Send a message or call someone using a very old version of WhatsApp from one of your companion devices.

Make calls from WhatsApp Desktop devices that have not joined the multi-device beta.

WhatsApp explained that while you can connect up to 4 companion devices simultaneously, you can only connect one smartphone to the same account at the same time.

Well, that’s all in theory. As you surely know, it is possible to work around the system and login on other smartphones using WhatsApp Web as described above. You just have to remember to switch the mobile page to the desktop version in order for the QR code to be displayed on the screen of your second smartphone.

Well, that doesn’t help much, but it’s still good to know that remains doable. You will then be able to send and receive messages via the secondary smartphone using WhatsApp Web, as you normally would from a PC or tablet. However, you will not be able to make voice or video calls.

Are WhatsApp messages always end-to-end encrypted on all devices?

In its official Multi-Device FAQ, WhatsApp ensured that “your personal messages, media and calls are end-to-end encrypted.”

How is it possible? Each of the companion devices that are connected to your account will now have its own identification key and will thus be able to encrypt and decrypt messages locally, without having to rely on the smartphone to which the account is linked to.

whatsapp how to multi device encryption

At the top, the old system uses the smartphone as a “hub” for encryption. At the bottom, the new system features each device with its own end-to-end encryption key / © NextPit

The same will apply for voice and video calls, which can then work without communicating with the user’s smartphone. WhatsApp will ensure that messages remain synchronized between devices, allowing you to browse through chat history from one device to another, even if the smartphone no longer serves as a relay point.

Another safeguard has also been included, where it will be necessary to use WhatsApp on the smartphone at least once every 14 days. Failure in doing so will close the active sessions on the linked devices. This is to ensure that the user account always has access to their primary smartphone. 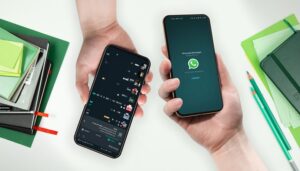