How to use Apple’s Memoji on Android smartphones

Can Apple's iconic Memoji also be used on Android? After all, they have been around for quite some time now. Surely, by now someone might have found a way to get them on Android, right? Well, that is what we are about to find out in this article!
Post Views: 48
PrevPrevious
NextNext

At the outset, let us inform you that Android users have several apps that mimic the functionality of Memoji. This article is for people who want the exact iOS variants of the Memoji on their Android smartphones. Since there is no ‘native’ way to do this, be warned that you will need to borrow an iPhone to get this done.

As clarified earlier, Memoji is a personalized, custom, user-created Animoji. They allow you to create a mini-comic strip version of your face (or another person’s, if you wish). It is possible to customize your skin color, hair, eyes, mouth, glasses, facial hair, facial shape, etc with these custom Animoji. Android users already have access to Memoji (not the iOS ones) thanks to apps like Bitmoji on Snapchat or AR Emoji on Samsung.

On Apple devices, users can create a Memoji from within the Messages application. Beginning with iOS 13 and iPadOS, Memoji have become a pack of stickers that can be accessed from your keyboard. To create a Memoji on your iOS device, this is what needs to be done.

Press the Animoji (monkey) icon and scroll to the right

Customize the characteristics of your Memoji and validate

Your Animoji is created and a Memoji sticker pack is then automatically created!

You can create several Memoji © / AndroidPIT

How to get Memoji on Android using an iPhone

Do you have a buddy with an iPhone or does your boyfriend or girlfriend use an Apple smartphone? Then all you need to do is borrow it for a few minutes and use it to create your own set of Memojis:

To do this, open any messaging app on the iPhone and use the iPhone keyboard to make Memojis. Here’s how you can do this.

Click on the Animoji icon (Monkey) and scroll o the right

Take your time and create/customize your own Memoji

The Memoji sticker pack will be automatically created

Now you can use the messenger app of your choice to share the created stickers to any phone – including Android devices!

Open WhatsApp on the iPhone

Write a message to your number

Select the Memoji you want and send it.

And these are my Memoji / © NextPit

Take back your Android smartphone and follow these steps:

The Memojis are then saved in your WhatsApp stickers

Adding Memoji to your Android stickers is child’s play © / AndroidPIT

To send your Memoji to one of your friends, simply access your WhatsApp stickers. Unfortunately, it is not possible to save them on your Android keyboard to send them via SMS.

In case you are simply too busy to try this method, you should know that there are several Memoji alternatives available for Android smartphones. In fact, it is much simpler to use these apps than try the aforementioned ‘convoluted’ method. Then again, that was intended for people who wanted to see these iOS-only Memojis on Android devices.

There are several apps that let you create Memojis on Android devices. Let us take a look at two alternatives that caught our attention.

The easiest one, perhaps, is Google’s GBoard keyboard app that bakes in Bitstrip’s Bitmoji Memojis within its settings. In case you don’t have Gboard installed, you can get it from the Play Store. Once installed, all you need to do is to click the ‘smiley’ on the left corner of the keyboard. What you now need to do is to select either the ‘Minis’ and ‘Bitmoji’ option.

When you click Mini, it immediately takes you to a screen that lets you take a selfie to create a Memoji. In case you click the Bitmoji option and you do not already have the Bitmoji app installed on your phone, Gboard will prompt you to install the app. All you need to do now is to follow the on-screen instructions for Bitmoji and you will soon have lots of Memojis to choose from on your Android phone.

While there is some chatter about Bitstrip’s Memojis being not as ‘artful’ as their Apple counterparts, we are pretty sure these Memojis shall keep most Android users happy.

If you are Memoji-envious and at the same time a Samsung user, you can count yourself lucky. Because the Korean smartphone brand offers perhaps the “best” Memoji alternative for Android smartphones. The key to happiness is in the “AR-Zone” app, which should be preinstalled on your Samsung smartphone.

Create an AR emoji with the AR emoji camera.

Then go back to the main menu and create a sticker pack with the selection “AR Emoji Stickers”.

Now you can select the stickers in the Samsung keyboard (also preinstalled) and send them.

In case you are looking at a comprehensive list of Android Memoji apps, you might want to read our dedicated article about it in the link below

Crazy about Animoji? Here are the alternatives for Android

Apart from these two apps, we do not really recommend trying out other Memoji apps you may find on the Google Play Store. These apps often conceal subscription traps or the apps promise a lot more than they actually deliver. But hey, who are we to judge? Let us know if you know of any other worthwhile Memoji apps for Android! 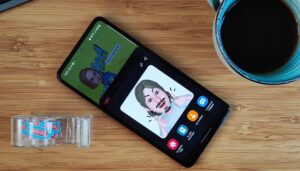