How to turn turn off hidden tracking on your iPhone with iOS 13.3.1

Since this week you can install Apple’s new system update (iOS 13.3.1) on your iPhone. Especially users of the iPhone 11 series can now enjoy new controls. The deactivation of Ultra Wideband U1 chip for location tracking is now possible. The system update is only 280MB in size, nevertheless, the changelog is quite long. If you don’t have the new update on your iPhone yet, you can get it later either by going to “General” and “Software Update” in your preferences or by downloading it via Mac or iTunes under Windows.

iPhone 11 and iPhone 11 Pro users know the teething troubles of their Apple mobile phones inside out. One example was the delay in opening, editing or sending a photo created with Deep Fusion turned on. This and the following errors are fixed by the new iOS update:

Communication limits (parental control): until now, children were able to bypass the screen time code to add new contacts to the address book.

Dialogue box playback: In Mail, several dialogue boxes for revocation have been opened so far.

Camera usage: until now, FaceTime has used the wide angle camera on the back instead of the ultrawide-angle camera.

Sound reproduction in the car: Apple CarPlay distorted the sound during phone calls.

Extended Siri voices: with the update to iOS 13.3.1, Siri voices can now (in the HomePod) access Indian English.

In addition to the extensive bug fixes, Apple brings a new preference option to iPhone 11 with iOS 13.3.1: manually disabling the location request of the new Ultra Wideband U1 chip. Until now, it was not possible to switch off the system for iPhone users. Although they were able to disable location services as usual (on iPhone 11, iPhone 11 Pro or iPhone 11 Pro Max), location data was still collected and stored locally on the phone. The new chip is intended to enable positioning between compatible iPhones. For example, Apple has announced that lost devices could be better located by the cooperation of other Apple users through the Ultra Wideband U1 chip – anonymously and without data storage, according to Apple. The function is not yet available.

This is how you turn it off:

First of all, you should open your Settings.

Then scroll down to the Privacy item and open it.

Scroll down until you reach the System Services item.

Slides the slider to off under Networks & Wireless Communications.

iPhone 11 users can now turn off location tracking via the UWB chip in the settings. / © NextPit

Although there is no more detailed information on this yet, turning off UWB can have a negative effect on connections such as Bluetooth, Wi-Fi, and ultra-broadband. If you have problems here, it is advisable to turn on the tracking services again.

Not only for the iPhone 11 series there was an iOS update. iPad, Apple TV, and Apple Watch have also received new software. A new version of macOS Catalina is also available on the Mac: 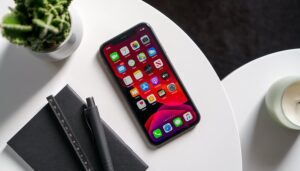