How to track your steps using just your phone

Tracking steps is big business these days, and the accuracy of pedometers is questionable. However, using your phone to count your steps is a nice way to figure out how active (or how lazy) you are being and can be used as a motivational tool for being healthier.

The first point I’d like to make is that you shouldn’t take these numbers a gospel. Use them as ballpark figures. If you are consistently average less than 2,000 steps on a Sunday, for example, as I do, it might be time to think about throwing in an afternoon walk to your routine. Alternatively, if you walk more than 20,000 steps some days, as I also do, it can be nice to check an app and get a ballpark figure for how far you walked.

The important thing to realize here is that you don’t need a smartwatch to track your steps. Fitbit and other smartwatch manufacturers are not all about counting steps either, but the truth is that lots of people buy these wearable devices simply for that one piece of data alone. And they don’t have to.

Google Fit comes pre-installed on most Android smartphones and it has undergone something of an overhaul of late. The app is much deeper than just counting steps, breaking down your activity into two categories; Move Minutes and Heart Points.

Google has placed a strong emphasis on Fit in the last couple of Android updates. / © NextPit

Move Minutes are earned for all activity. You can track the number of steps you take, of course, but it will also recognize when you take the stairs instead of the elevator, for example. You’ll also get a breakdown of your various walks or runs in timeline form in the Journal tab, which is nice.

Like Google Fit, Apple’s own-brand fitness app is much deeper than first meets the eye. Even if you don’t want to get into the nutrition and sleep cycle stuff, the activity tab will do a solid job of tracking your steps. You get data for steps, walking and running distance, and ‘flight climbed’ when you take the stairs.

You can’t delete Apple Heath, so why not use it? / © NextPit

There are easy-to-read breakdowns of days, months and years too so you can track your progress if you are making a concerted effort to increase the number of steps you take as part of your daily routine. You won’t need to install it either. It’s one of those unbelievable Apple apps that will forever live on your iPhone. It’s there, whether you like it or not, so why not use it?

Huawei is now the second biggest smartphone manufacturer in the world, and the Chinese brand is also pushing health apps to users. Huawei health is not as slick as Google Fit or Apple Health, but what it lacks in depth, it makes up for in simplicity.

Huawei Watch GT: can’t do much, but maybe that’s a good thing

The interface is not as slick as some others, but it does the job just fine. / © NextPit

Again, this app is more than a pedometer, but steps play a vital part of how it tracks your health vitals. As well as keeping tabs on the number of steps you take and the calories you’ve burned (taken with a pinch of salt, of course), you can track a specific walk with GPS and set a goal. Fancy an evening stroll and would like to hit 3km? Simply punch in the details and you can have the app track your progress. It works for running and cycling too.

You may have heard of Leap Fitness Group, or if you’ve been on the Google Play Store any time in the last couple of years you will certainly have seen the user popular apps called things like; Six Pack in 30 Days, Lose Belly Fat in 30 Days and various home workout apps.

The company’s dedicated pedometer is one of the most streamlined ways of keeping track of your steps without using a smartwatch or fitness band. If you just want to measure steps, and don’t need all the nutrition and sleep cycle extras that come with Google and Apple’s pre-installed apps, then this is the one for you.

For a dedicated, streamlined pedometer, this will do nicely. / © NextPit

Like Huawei Heath, it also comes with some gamification. You can earn badges for completing certain goals, such as reaching 50,000 steps or burning 1,500 calories. This kind of stuff is not for everyone, but it helps with motivation for those that need the extra push. 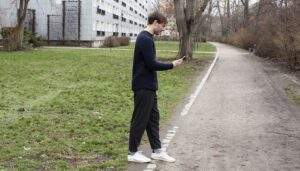