How to connect an iPhone or Android smartphone to your TV

Casting vs Mirroring: What’s the difference?

How to cast an Android smartphone on a TV

How to cast an iPhone on a TV

How to connect your smartphone to your TV via HDMI cable

Casting vs Mirroring: What’s the difference?

Mirroring consists of duplicating your screen or rather the display of your smartphone on your TV. The device’s interface is broadcast in real-time on your TV and reacts to the actions you perform from your smartphone. This type of broadcasting is ideal for displaying local content such as photos, videos, or documents.

Casting your screen goes further than just duplicating the display. The broadcasting is not done in real-time but through an application — e.g. YouTube or Netflix — on your smartphone that sends and retrieves via its servers the content to display it on your monitor, or TV. So you can continue to use your smartphone since it is not the source of direct broadcasting of the content cast on the screen.

Basically, if you want to show your vacation photos on Google Photos, zoom in and out and scroll through them at your own pace, you should opt for mirroring. If you rather want to watch a Netflix series on a screen bigger than your smartphone without having to leave the latter constantly on and avoid touching it, then you should opt for casting.

But either way, solutions like Google Chromecast and Apple Airplay allow you to do both. I will therefore use the word “cast” for both casting and mirroring.

How to cast an Android smartphone on a TV

Casting an Android smartphone on a TV with Chromecast

The most obvious solution, and one that works on almost all devices (even Apple), is Google’s Cast technology. Google Cast is available on both Android smartphones and iOS devices. Many apps are compatible. Most Android TVs have Cast directly integrated as well as Android TV boxes. If you don’t have one, the only thing left is Google’s Chromecast TV stick.

The basic Chromecast stick sells for about 30 dollars, but you can also opt for the 4K version with Google TV, which costs about 60 euros. This version is more than an HDMI key to caster, but a TV box in its own right.

Casting an Android smartphone to a TV via Google Home

Another method to connect your Android smartphone to your TV is to use the Google Home application. This method will work if you have a Chromecast or if you have a smart TV with Android TV and Chromecast built-in.

Set up Google Chromecast if you haven’t done so already. If your TV has a built-in Chromecast, it will automatically appear in the app.

Select the device of your choice and tap Broadcast my screen at the bottom.

Watch exclusives like The Expanse, Wheel of Time, Goliath, Invincible…

How to cast an iPhone on a TV

For people on the Apple ecosystem, the best option is the brand’s AirPlay technology which is, like Google’s, based on Wi-Fi. It is also compatible with other devices than those of Apple.

To stream your iPhone or iPad display to your TV, simply open the iOS shortcut panel and then launch AirPlay streaming to your Apple TV. You can also use the feature in apps with the same logo. Most video or audio players on the web are AirPlay compatible. So you can stream directly from your iPhone browser.

However, if you don’t have a compatible device, you’ll have to buy an Apple TV 4K, which usually costs $179, more than three times the price of a Chromecast. So yes, you get other features like Apple TV+, HomeKit, or Apple Arcade. But it is still something to keep in mind.

how to cast apple airplay

You can access Airplay via the iOS shortcut pane / © NextPit

Miracast technology was created by the Wi-Fi Alliance consortium (owner of the Wi-Fi brand) makes it possible to broadcast the smartphone screen on a TV connected in Wi-Fi Direct. In concrete terms, the connection is made directly between the two devices, without the need for a Wi-Fi router.

As with Chromecast, you need to have a TV with this feature or invest in a Miracast dongle. The most popular is the one from Microsoft, which can be found for about 50 dollars on Amazon. Some connected TVs are also equipped with this technology and do not need a dedicated dongle. The principle is the same as for Chromecast:

On your smartphone, look for the Stream Screen (or similar, see below) option from the quick access menu.

Select the device (your TV), you will see a Miracast symbol or other indication that you can mirror the screen.

On your TV, approve the connection.

But honestly, this solution is somewhat outdated. It doesn’t work with Apple devices and you can’t lock your smartphone during a broadcast. Basically, get a Chromecast.

Depending on your phone, TV, or streaming device, the screen sharing feature can be presented with a different name, such as:

If you don’t have a Chromecast-compatible device, use an HDMI cable and adapter to connect your phone to your TV and play what’s on your screen. There are several options available to you, and which one you choose will depend on the type of screen you’re connecting to, how long you want to stream, and most importantly, whether you need to charge your phone while doing so.

The simplest option is a USB-C to HDMI adapter. If your smartphone has a USB-C port, you can plug this adapter in and then plug an HDMI cable into the adapter to connect it to your TV. But this method will take up your charging port unless you have multiple ports, like on an Asus ROG Phone 5, for example.

If you’re still on micro-USB connectivity, you’ll need a matching adapter. On the plus side, these products are generally older and therefore often cheaper than their USB-C counterparts. With this method, your phone will need to support a different protocol called MHL. If you have a compatible smartphone, connect it to the adapter, then attach an HDMI cable and connect it to a TV.

For Apple products, with a few rare exceptions like the iPad Pro, you’ll have to, not surprisingly, shell out a hefty 50 euros for a Lightning to HDMI adapter. Be careful with USB to HDMI adapters. You’ll need to check your devices’ compatibility with 3.0, SuperMHL, and DisplayPort standards first.

That’s it for this guide on how to connect your smartphone to your TV to stream your screen. What do you think of the tips in this tutorial, did you find them useful? Do you know of any other method I haven’t mentioned here? 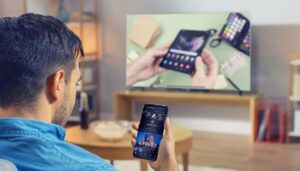