Having problems with your LG G6? Try these solutions

Even brand new, high-end phones have their share of issues, and the LG G6 is no exception. Users have reported problems with software bugs, and even some which may be due to hardware. If you're getting weird error messages, having problems with your fingerprint scanner or having other issues, don't worry.
Post Views: 60
PrevPrevious
NextNext

Users have experienced their LG G6 devices randomly crashing, and when they restart, an error message is displayed which says, “Your device is corrupt. It cannot be trusted and may not work properly.” The screen gives instructions to visit a link (g.co/ABH), on another device, which explains the error’s meaning. The error will appear for about 10 seconds, then your phone should continue booting as usual.

While this can be expected to happen due to Nougat’s Verified Boot process if you unlock the bootloader, it is happening even to users who haven’t done so. There’s no official solution for this problem yet, but an update may come in the future. Until that day comes, restarting the phone can fix the problems, but it may take a few tries. If that doesn’t work, you may have to resort to a factory reset.

Users have reported getting the “Moisture in USB port” warning message, even when there’s been no chance of moisture. Additionally, sometimes users are also getting the USB plugged in notification and sounds over and over again, even when there’s nothing plugged in. These issues of phantom moisture and notifications when nothing is plugged in can be caused by debris or a bad charging cable. First, you should try another cable to see if the issue is with your charging cord. One user says washing the phone and cleaning the USB port solved the problem. So, you can also try soaking the phone and carefully cleaning the port with a soft cloth to dislodge any dirt or dust, then dry the phone thoroughly.

If you’re having issues with the USB port, try these tips! / © NextPit

Some users have reported issues with the headphone jack of the LG G6. Static noise in the background and random pausing, playing or skipping songs were among the complaints, along with activating Google Assistant unnecessarily. Even replacing the headphones, or the phone itself, doesn’t seem to fix the issue for everyone. Not all hope is lost though. If this issue sounds familiar to you, that’s because a similar headphone jack problem happened with the LG G3, and luckily, a fix has already been found. Using headphones with a built-in microphone prevents these strange, unwanted behaviors and the static noise. So, save yourself some hassle, and just try some new headphones with a mic.

This issue is very easy to fix with a new set of headphones that have an integrated mic. / © NextPit

Some are finding the fingerprint scanner of the LG G6 to be slow, or to take several tries to recognize the registered fingerprint. That’s not the case for most users, who find the scanner to be quick and accurate, as it should be. So, if you’re phone is slow to unlock, there’s a problem. Try deleting the registered fingerprint, and then setting up the scanner again with your fingerprint. You can even register the same fingerprint twice, for a better chance of it being recognized. If that doesn’t do the trick, try clearing the cache in Settings > General > Phone management > Device storage > Internal storage, then clear Cached data.

If your fingerprint scanner is slow, there are ways to fix it. / © NextPit

The voice command for launching Google Assistant isn’t working for some LG G6 users. If you find that saying “OK Google” produces no response, and you’re unable to successfully retrain the voice model, then you’ll want to try the following solution, which involves clearing the cache and retraining voice recognition. If you want “OK Google” to work again, go to Settings > Apps > Google app > Storage > Manage space, then Clear all data. After that, you can retrain the voice model, and your problem should be solved.

Don’t forget to leave a comment to let us know if your problem has been solved, or if you’re having a problem that isn’t listed here. Good luck with your LG G6! 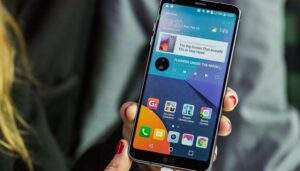