“When will we reach ‘peak tattoo’?” asks Alexander Proud.

The days when tattoo art remained the preserve of sailors, hippies and long haired dudes you met in a youth hostel whilst backpacking through South East Asia, are long gone. Alexander Proud notes that some of his conservative middle-class colleagues have, at the very least, already got a detailed, and multi coloured arm sleeve, an intricate design creeping up their neck or a dragon encircling their thigh or bicep.

“When pretty girls in floaty, floral dresses began appearing with chest tattoos, or lawyers turned up to meetings with knuckles spelling out ironic messages, I realised that tattoo art was firmly established, and possibly un-peak-able” says Alexander Proud.

It’s been quoted that ‘around one fifth of the total UK population now has at least one tattoo and this figure is estimated as one third of all young adults’ (1) states Alexander Proud. “Tattoos seem to rise in popularity as steadily as prices within the London housing market.”

Alex Proud notes a point from the past…

Tattoos have a rather more interesting history than you might imagine. Tattoos actually used to be posh. If you search online there is an article in The Harmsworth Monthly Pictorial Magazine, entitled “Queer Stories of a Queer Craze.” (2) It describes tattooing as “now the popular pastime of the leisured world.” This wasn’t written in 2019, but in 1898, when the aristocracy of Europe were tattoo mad, with Britain leading the craze.

The roots of this society fashion for ink had its roots in Captain Cook’s C18th South Pacific voyages where he discovered flamboyantly decorated Polynesian islanders (the word tattoo originates with the Tahitian word “tatau”). Sailors then brought the trend back to Great Britain, and those at the cutting edge of style, including the gentry, would follow them under the needle.

When Alexander Proud grew up however, tattoos were firmly seated within the working classes, with sailors and soldiers or with travellers and social dropouts. “Getting a tattoo was definitely not on my to do list”, said Alexander Proud.

“Towards the end of the 80s, said Alexander Proud, you saw a few more of them but they were definitely still ‘exotic’ or ‘Bohemian’, I don’t think I would have dared go home to my mum with one even as a grown man.”

Even when people started daring to get tattoos at University, they were tiny, discrete and tasteful. A flower, a bird, possibly the ubiquitous Chinese or Celtic symbol somewhere that you could hide it from work, parents and in job interviews. “A token tattoo might have been a rite of passage for some of my more adventurous friends, but it wasn’t something you flaunted or wore out in public, not if you still wanted to go into law or management anyway.” Says Alexander Proud.

When did the craze start, wonders Alex Proud?

So when did the tattoo craze start? Alexander Proud can’t be sure but he clearly remembers the first person he admired and knew well who was a head-to-toe canvas for tattoo art. “Amy Winehouse… When we opened Proud Camden in the summer of 2006 Amy practically lived in the bar. At the time, she seemed to be getting a tattoo every week – and that’s when I also started to notice my staff getting inked in a really big way. So, if you had to pick a start date for ordinary people getting the kind of body art that was previously little seen outside biker bars, I’d go for around 2005.”

For Alexander Proud personally he admits “I’m still far too scared of my mum to get a tattoo. But I have no real problem with them, although I admit, I don’t understand people who collect them like accessories.” Not because he disapproves, just because well “you wouldn’t wear 15 bracelets or necklaces at once, and every day? And also what happens when (not if) your tastes change and you want to change your tattoos along with them?” asks Alexander Proud.

As a 25 year old, how do you know what you’ll want decorating your arms, chest or face as a 60 year old? “We all know that the combination of blurry, greyed ink, flabby skin and age spots is not a hot one”. Says Alexander Proud.

“I literally have no idea what today’s hipsters who’ve tattooed both legs will look like at 60, because I have never seen a 60 year old woman, or man, with that many tattoos and maybe that’s not the point, and maybe they don’t care and maybe that’s brave, and bold and admirable.” Says Alexander Proud.

But as a gallery and cabaret club Owner owner, Alexander Proud also asks, “But can you call it art? Or artistic expression? Is it an individual expression of personality or taste? Or is it another example of groupthink, the modern, social media driven tribalism that makes people scared of standing apart. In a world of tattooed twenty somethings, the un-inked skin would actually be the truly radical choice. It is certainly not an expression of individuality anymore”

Or as is the case with a well hung painting or photograph on a blank wall. Sometimes less can be more. A simple, unique and beautiful piece makes a bolder statement with greater effect than a crowded wall which easily loses all potency.

Then again, asks Alexander Proud, “is obsessive tattoo-ing, actually bordering on an addiction? Are you like a junkie who’s oblivious to his deteriorating appearance as long as he can get his next inky fix?”

If Alexander Proud had to make a prediction, it would be that as the current generation’s children grow up and become young adults, they will rebel by leaving their skin unadorned. They will revolt against their parents’ uniformly crowded ink blurred torsos, and choose beauty that is purely skin deep.

Alexander Proud’s top tip is that this might be the time to plan ahead and start investing in companies that provide revolutionary tattoo removal technologies. 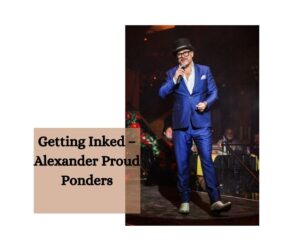