Does using your phone at night prevent you from falling asleep?

It’s often said that one shouldn’t spend too much time looking at a screen, and that it’s better to avoid staring at your smartphone or computer in the evening. Is there any truth to this? Are screens bad for your eyes? Let's take a look at this in more detail.
Post Views: 51
PrevPrevious
NextNext

There are so many myths about technology that we decided to create a series of articles in order to distinguish the true ones from the false ones. You’ll be able to find them quickly, as all the articles will be labelled “myth busting”, and we’ll explain if what you hear is true, or a simple urban legend. This week, we’re trying to find out whether using a screen has effects on sleep or not.

Smartphones prevent you from falling asleep: fact or urban legend?

We’ve heard everywhere that the using a screen is bad for your eyes, and that it can prevent you from falling asleep. This is why night mode was introduced, in order to combat this problem. Nougat considered adding the feature, but ultimately it didn’t see the light of day. The manufacturers therefore decided to implement this feature on their devices themselves, which is why it’s sometimes found under several different names such as ‘night mode’, ‘eye protection mode’ or ‘blue light filter’, with each manufacturer distinguishing itself from the other. However, they all have the same concept: the blue light filter.

Blue light: what is it?

Let’s get into the details. In our eyes (or more precisely in our retinas), we have photoreceptors which are extremely sensitive to blue-violet colored waves. If the light is generally unharmful to the eye, colors with a short wavelength are charged with more energy, which ultimately isn’t very good for it.

Some night modes even allow you to adjust the filter level. © ANDROIDPIT

The blue light disturbs the melanopsin (the pigment used by the photoreceptor), and by extension the photosensitive ganglion cells which also use it. All this, conveyed to a large scale, causes eye fatigue and sleep problems because the brain acts on this information received.

It’s worth noting that the harmful effects of blue light are only a problem when the light is artificial; basically when you’re staring at a screen. Many professionals appeal the dangers of this blue light, especially to children who grow up constantly staring at screens, and other parts of the eye may also be affected, damaging the tissues. There’s no miracle solution as of yet, but many opticians offer anti-blue light glasses.

If the blue light is filtered, your eye will obviously be less prone to fatigue and your sleep will be less affected. That said, sleep depends on many contributing factors, so don’t draw conclusions too hastily. If your device offers this mode, don’t hesitate to use it, your eyes may benefit from it.

What topic would you like to see discussed in the next article on myth busting/facts? 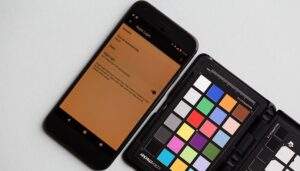