Change these settings to enhance your Huawei experience

Huawei stuffs its smartphones with numerous functions and features. But not all of them are as useful as the one-handed mode. Others are annoying, take up unnecessary space or disturb some apps' ability to function.
Post Views: 46
PrevPrevious
NextNext

Huawei usually ships its smartphones with pre-installed apps. These include, for example, various games or apps from Facebook, Instagram, Booking.com or Amazon Prime Video. But if you don’t use these apps, you can easily delete them from your Huawei device.

Bloatware can be deleted on Huawei devices. / ANDROIDPIT

In order to do this, hold your finger on the corresponding app until the icon is enlarged and can be moved. Then drag the icon to the Uninstall text at the top of the display. Alternatively, you can also drop the corresponding programs from your smartphone in the settings under Apps & notifications > Apps.

The Huawei system apps, however, cannot be uninstalled, such as the gallery, music and contacts apps. To a large extent, they can’t even be deactivated. The pre-installed Google apps such as Photos, Play Music or GMail all look different. Apps that use Google Docs, Presentations or Duo can even be completely uninstalled. It’s best to just go through the app list and think about what you really need.

Everyone can relate to having a full memory on their Android device. Unsurprisingly, Huawei relies on extremely aggressive RAM management for its smartphones. This often leads to apps that play music or podcasts in the background to falter or be turned off completely. If you notice this happening, you should limit EMUI’s memory management.

All you have to do is open the app information under Apps and Notifications, press the Battery option and then the Start button. Here you should choose Manage automatically and mark Run in background in the list.

If that’s not enough, there is another option. Configure the smartphone settings as follows: Go to Apps and Notifications > Apps > Settings > Special Access > Ignore optimizations. Then tap Allowed and select All Apps to see all the apps you can customize. Now look for the app you have problems with and tap Allow.

Use the app drawer

The design of Huawei’s EMUI has always been inspired by Apple’s iOS. Even though the manufacturer has now moved closer to the classic Android look, there are still remnants of the iOS design. This also means that all the installed apps are placed with an icon on various home screens. Fortunately, Huawei gives you the option of reactivating the app drawer if you want.

Just go to the smartphone settings, tap Display, and then tap Home screen style. You can then retrieve the app overview by selecting the drawer style. The corresponding icon will then land in the middle of the app dock and can’t be moved

The P20 Pro is one of the smartphones from the Chinese manufacturer that can be operated via different gestures on the fingerprint sensor on the front instead of via the navigation bar. If you want to go back to the navigation bar or try the virtual navigation key, proceed as follows: open the Settings, go to System and then to System navigation. You can choose from different styles.

Here’s another feature that EMUI borrows from older iOS versions to display the network operator on the left side of the notification line. This is usually unnecessary and just takes up space, which is extremely annoying, especially on the Huawei P20 with its notch. Fortunately, the display can be deactivated in just a few steps.

In a few clicks, the problem is solved. / © ANDROIDPIT

First go to the smartphone settings. Then tap Apps & notifications and then Notifications & status bar. Then just switch the Show network operator name to Off, which will free up your Huawei’s notification bar.

By default, Huawei smartphones display the battery status next to the actual battery icon in terms of percentage. This will drive you crazy, since the battery doesn’t run down more slowly when you stare at the display every time you use the phone. It takes up space, which is especially hard to come by on models like the Huawei P20 with the notch.

What are your favorite features on your Huawei smartphone? Do you have other tips and tricks? Write it to us in the comments! 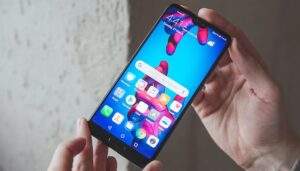