Android Easter eggs: the best software surprises over the years

Although the developer preview of Android 12 is already out, there is no denying that we are still officially on Android 11.  The hidden Easter Egg game within Android 11 is called “Android Neko”. This, however, is not an entirely new game and it has appeared before, back in Android Nougat.

Here, you will have to find the so-called “Cat Controls” and feed your kitten. It’s almost a contemporary Tamagotchi.

Android 10 is a milestone in the history of the operating system. It was also the first occasion where Google decided to no longer name the version of Android with the names of popular desserts. However, the good news is that despite this, the tenth version of the OS did not give up the famous Easter Egg.

Google presents a seemingly trivial screen that shows the wording android 10, with the numbers in the foreground. But interactivity is not lacking: you can, in fact, move the numbers and the word android to any point on the screen.

Android 9.0 Pie was released by Google in October 2018 together with the Pixel 3 and Pixel 3 XL smartphones. The easter egg of this version hides something interesting. In addition to displaying the Android Pie logo with hypnotic colours, it is possible to find a fun Microsoft Paint style drawing program. Just press and hold the “P” button several times to get access to it!

The new Easter egg features a blue screen with a black octopus floating around. The octopus has an (Easter) egg-shaped head, which you can drag around the screen if you want to, and his eight (think Android 8.0) legs will follow. While this isn’t the most engaging little feature, it’s a nice addition.

Android 7.0 Nougat features an Easter egg where your mission, should you choose to accept it, is to attract cats to eat plates of food you serve up. Yes, it’s actually true – we couldn’t make this stuff up if we wanted to. You can set this up as follows:

Go to the Settings menu

Scroll to About phone

The cat emoji should appear directly underneath the N

When the cat’s head appears, this means you’ve successfully activated the Nougat Easter egg. You’re not finished yet, as there are a few more steps to complete:

Drag the new icon Empty dish to your notifications bar.

Now you’ll be able to attract cats. To do this, tap on Empty dish to select the bait of your choice, and wait. When a cat comes to the dish, you’ll be notified. You can even give the cat a name and share it with your friends. The cats will disappear after a while.

Feed the kitty on the new Android 7.0 Nougat / © NextPit

Android 6.0 Marshmallow features another Flappy Bird-inspired mini-game as its Easter egg, only this time, you must navigate through the lollipops to get the marshmallows at the end of them. It’s still a frustratingly difficult game; access it by tapping your device’s software version until a Marshmallow appears and then long-press it.

Try not to kill your Android in a giant Marshmallow / © NextPit

For the Android 5.0 Lollipop Easter egg, Google took inspiration from a pop culture phenomenon of the time, which was Flappy Bird. Tapping the software version will produce a flying Bugdroid that you must guide between Lollipop obstacles. It’s an infuriating game that plays very similar to Flappy Bird.

Android 4.4 KitKat’s Easter egg paid homage to all of the past versions of Android. Go to Settings > About phone and tap the Android version several times. A spinning letter K will appear which you can tap and hold to reveal the KitKat logo. Tap and hold that and a board of colored tiles featuring the logos of past Android versions will be revealed.

Devices running Android 4.1 Jelly Bean will be greeted by a huge smiling red jelly bean in this version’s Easter egg. Access it the same way as the others and long press on the giant jelly bean to flood your displays with more beans. Swipe these to fling them in any direction.

Jelly Beans for everyone! / © NextPit

Do you remember Nyan Cat? The pixelated cat who travels to outer space on a rainbow? Well, Android paid tribute to the Internet’s favorite feline friend with the Easter egg for Android 4.0 Ice Cream Sandwich.

After tapping on the Android version number several times, a pixelated Bugdroid will appear. When you tap and hold on this, a Nyan Cat-inspired animation will begin featuring 8-bit Nyandroids shooting up into space. Nice.

An ice cream sandwich Android floating through space is what you see in Android version 4.0 / © NextPit

Android 3.0 Honeycomb’s Easter egg is far less scary than Gingerbread’s but it’s nonetheless strange. Go through the same steps as mentioned above to activate it, and what you will see is a neon bee. A square box will appear underneath the bee’s stinger housing the word ‘REZZZZZ’.

In the Tron universe – which the bee appears to be part of – ‘Rezzing’ is the term used for generating a person or object in its game grid. Quite why Google is riffing on Tron, we don’t know.

The Easter egg found in Android 2.3 Gingerbread is frightening. Featuring a hand-painted picture of a demonic, bow-tie wearing, yellow-eyed gingerbread man, a disconcerted Bugdroid and zombies, this first Easter egg is not only unsettling but strikingly different from Google’s later attempts. Thankfully.

To view this – as well as all of the other Easter eggs on our list – go into your device’s Settings, choose About phone and tap on the Android version until the Easter egg appears.

And you, have you found your Android’s little surprise? Which Easter Egg was your favorite so far? Let us know what you think in the poll below. 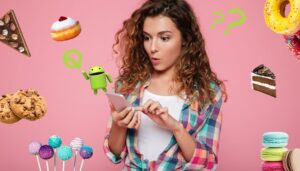