Last year in Nigeria, African telecoms group MTN doubled its mobile money transaction volume, deployed 4G in over 9,000 new sites, and bought spectrum for its 5G rollout. On Feb. 27 while unveiling its new logo at Lagos’s Eko hotel, the company sold these milestones as a bundle that will boost its appeal to Gen Z customers.

The logo change was nothing fancy, ditching a clash of four colors for a black rendering of an encircled  ‘MTN’ – projecting the company as embracing agility. Adia Sowho, and Emamoke Ogoro, the company’s chief marketing officer and brand communications general manager respectively, paid homage to the tech buzz that has made Nigerian startups fascinating to global investors.

And so pledging to be forward-looking, MTN treated that evening’s audience of employees, influencers, and journalists to a live cameo by Ayra Starr, a vivacious singer who hadn’t yet been born when the company entered Nigeria in 2001.

What that real estate is worth remains to be seen, but the company’s “Ambition 2025” goal to primarily be a digital services provider rests on tangible communications assets.

While it lost a tenth of its mobile subscribers due to a government freeze on new SIM card sales to ensure old cards were properly registered, MTN added 5% more data subscribers for a current total of 34.3 million. On average, the megabytes used per MTN subscriber increased by over 60%. These numbers can be read as the company reaping its investments in more 4G sites which it says now covers 70% of Nigeria, while planning for a 5G future.

Ayoba, an MTN instant messaging app, grew over 170% to now boast 3.8 million active users. It is part of the company’s digital division, which produced the highest revenue growth of all service categories.

Fintech is the present and future

Using 4G to grow data subscribers is only one step. MTN’s transformation is towards being a financial services provider, which is where its pitch to Gen Zs (and other users, it must be said) comes alive.

Nigeria has the highest proportion of financially excluded adults in sub-Saharan Africa at 36%, according to a report (pdf) by EFInA, a UK government-funded organization. That adult is most likely between 18 and 25 years old.

The gap is an opportunity for MTN’s mobile money business that added over 370,000 agents and doubled active users to 9.4 million last year.

After much reluctance, the Central Bank of Nigeria finally gave “approval in principle” to MTN and Airtel to operate payment service banks (pdf) – companies that specifically use mobile and digital channels to give low-income Nigerians access to deposit and payments products.

For MTN, a go-ahead to begin operations would mean freedom to take advantage of two decades of telecoms investment to possibly break out as a legitimate fintech company, thereby competing with startups that had claimed Nigeria’s digital natives as their exclusive constituency.

Sign up to the Quartz Africa Weekly Brief here for news and analysis on African business, tech and innovation in your inbox. 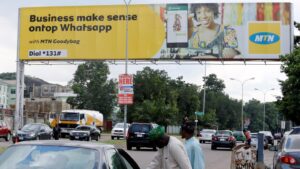