If you've been following the virtual reality / augmented reality, you've likely already gotten to know your three R's: VR (virtual reality), AR (augmented reality), and MR (mixed reality). But you may also have come across a fourth: XR, the definition-blending cousin of the well-known trio that is popping up increasingly in the commercial and business world. Do we really need yet another R? Or just one to rule them all?
Post Views: 27
Share on facebook
Share on twitter
Share on pinterest
Share on email
Share on whatsapp
Share on skype
Share on linkedin
PrevPrevious
NextNext

XR can stand for X-reality,  eXended reality or cross reality depending on who you ask (please, no CR!). It’s not an exactly new term, either, having been used to refer to come kind of extended visual technology for decades. Sony, for example, has used the term XR in patents since the ’80s, although the company does not hold a trademark for the term “XR” itself.

But now XR is making a comeback in the tech world. XR labs, XR startups, XR goggles, XR conferences and so on, and always related to what would otherwise be VR, AR, or both in tandem. Basically, any kind of next-generation virtual content, whether it’s in a VR headset, through our smartphone lens or even beamed directly onto our eyeballs. With different levels of detail, different levels of immersion, different ways of interacting with digital objects, a lot of companies don’t limit themselves to just working in just one box.

The Magic Leap One beams the content right into your eyes. / © NextPit

Clay Bavor, Google’s head of AR and VR has previously outlined a useful way of thinking about XR in a blog post on Medium, in which he stated: “If VR and AR are two points on a spectrum, what should we call the spectrum? Here are a few ideas – immersive computing, computing with presence, physical computing, perceptual computing, mixed reality or immersive reality. This technology is nascent, and there’s a long way to go on our definitions, but for now, let’s call this immersive computing.”

The early days of XR technologies may have started out in silos, but as the tech matures, developers and manufacturers will have to accept convergence and develop a cross-platform ecosystem that suits a wide range of use cases, whether for industry or entertainment. For it to go mainstream, it needs to be shared and shareable, and that’s where it makes sense to think about all these different devices, from the AR guide through your smartphone camera to things like Snap glasses or Google Glass, to headset based AR overlays like Magic Leap to immersive VR headsets like the HTC Vive…all as XR devices of different levels that will become ever more present in our lives.

Digital maps of places or items, pieces of information or virtual beings don’t always fit neatly into one R. And digital assets developed for one thing could also be used for another. Recently, I spoke to Nomtek, developers of content for Magic Leap who cut their teeth making smartphone AR. Piotr from Nomtek speculated about an ‘AR cloud’…a mix between a reserve of digital ‘stuff’ overlaid over the real world that could be accessed by your smartphone, glasses or  headset to experience the same information but with different levels of immersion, interaction with real objects, and occlusion of your normal senses.

Developers like Nomtek are naturally interested in digital content and XR apps being accessible by as many devices as possible, and as much as hardware manufacturers enjoy keeping some exclusives to their own products, ultimately, a certain openness is critical to mass adoption of a platform and benefits all manufacturers. Just think about how many manufacturers benefit from Android and Google Play, for example.

Smartphone AR apps are still an important part of the MR spectrum. / © NextPit

All the big players see an advantage in openness and cross-platform technology. Key industry leaders from Oculus, Valve, Unity, Epic, Samsung, and Google form the OpenXR initiative with this mission in mind: “a cross-platform VR standard eliminates industry fragmentation by enabling applications to be written once to run on any VR system, and to access VR devices integrated into those VR systems to be used by applications”

Already, virtual places and objects are accessible in different ways, by different devices. For example, VRChat and Somnium Space can be explored via VR headset, smartphone or traditional desktop PCs. This trend will continue as developers look to reach as many people as possible, to achieve that ‘network effect’, and a critical mass that gets everyone to join in because, hey, your friends are doing it.

In the end, there are going to be worlds to explore, games to play, information to be had, that require different levels of immersion depending on user preference. Some people can’t stand VR but love AR, for example. In industry, you may not need total immersion through your headset/glasses/camera to spot certain defects in a product, but might want more digital overlay to change its design, or test it.

All this falls somewhere on the XR spectrum. At some point in the future, I can see this being done through the equivalent of a dial or dimmer switch, adjusting the level of ‘virtuality’, or digital content in your field of vision, from 5-95% according to your needs.

Until then, the spectrum way of thinking is a good paradigm. Enough electric ink has been spilled over “VR/AR/MR is dead/coming back/better than…” or that one is so much more important than the other. XR technology continues to grow in tandem, thinking outside the boxes, and even though the letter X may recall the cyberpunky tryhard cool of early ’90s VR fantasies, I for one embrace the broad perspective it entails.

Do you agree that XR is a good way to refer to the family of VR/MR/AR technologies? How do you see this industry developing? 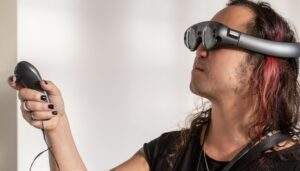