The secrets to getting faster Android updates

Getting Android updates faster is pretty much at the top of everyone's wish list, right up there with better battery life. So today we thought we'd let you into a few little secrets to help you get faster Android updates.
Post Views: 48
PrevPrevious
NextNext

How do Android updates work?

Before we go through the methods, it’s important to have an idea of how they Android updates work to avoid relying on procedures that are not only unnecessary but sometimes even harmful to your device.

When the rollout to the latest Android update for a Pixel starts in a particular country, Russia and Poland are often the chosen ones (probably the updates prefer low temperatures!), and after the first 24-48 hours it can reach only 1% of the devices in question. You read that right, only 1%.

The reason behind it is not a sudden management problem but a conscious choice, a sort of settlement phase during which any problems encountered are analyzed before moving on to the next stages that will see the update arrive respectively on 25%, 50% and finally on 100% of the devices.

The path followed by the updates is: Google> brand> operators> official release

The whole process takes a few weeks to complete, and if your device doesn’t receive the update during the first phase, all you have to do is wait patiently for the second phase or the next phase.

The situation is slightly different when it comes to other brands or branded devices because the update will have to undergo further changes and optimizations, depending on the interface, apps and features you want to implement, before being tested, released to operators and then be distributed to the general public (including you). The path followed will then be: Google> brand> operators> official release.

Another factor that affects the speed of receiving the update is the country where you are: Samsung, for example, tends to release the updates first in the Baltic countries. In short, all you have to do is wait for your moment and remember that checking the updates available on your Android is not very useful because the device will check the presence every few hours, in accordance with the steps explained above, regardless of the number of times you press the button dedicated.

Have you also tried to force updates by systematically resetting the Google Service Framework data to speed up times and immediately receive the latest version of the software on your Android device? Don’t worry, you are not the only one to have looked for an alternative solution by cleaning up your data in the hope of receiving the update to Oreo or Nougat in four and four’eight.

Unfortunately, however, this trick is actually useless and Dan Morrill, one of the well-known engineers at Google, has been trying to explain it to us for some time now. Deleting the data will not allow you to appear at the top of the list of devices waiting to be updated but, on the contrary, it may cause anomalies in the behavior of some apps.

Leave things as they are and don’t clean up the Google Services Framework data, you could only make it worse and slow down the process as after deleting the data you will be assigned a new Google ID, sliding you to the end of the waiting list!

Should you factory reset your device before receiving the update?

A second common myth that needs busting is the mistaken belief that doing a factory reset of your device when an Android update is approaching will automatically get you the update faster. Resetting your smartphone will also automatically reset your Google ID and, once again, you will be sent back to the bottom of the list. The best thing to do is, in fact, the following:

Make a backup of your data.

Wait for the update notification and install it.

Backing up your data on Android: what it is and how to do it

Stop right there! Before resetting the device to factory data, make a backup and wait! / © NextPit

Choose a Pixel or an Android One device

If you really want faster and more frequent updates on Android, it’s good to consider devices that come with Android One or pure Android stock. Check out the article below to get more detailed information.

Google’s own Pixel line, for example, are always the first to get the latest Android version, and this also applies to earlier Pixel models. So if you can’t afford a smartphone from the Pixel 3 range, consider a Pixel 2 or even the original Pixel.

With the purchase of a device signed Google you will also have access to the beta versions of the operating system to test with your own hands the news before everyone else!

Being able to receive updates earlier than the others may not be a sufficient factor to push you in the direction of a Pixel, especially if you prefer the UI of a different manufacturer. Waiting times for Android updates vary greatly from brand to brand so, if speedy updates is an important factor for you, make sure that your next device must be produced by one of the best brands in this field. Many smaller companies launch only a few devices and have little or no concern about upgrading their products. These devices are often generic, with designs that are bought in China and are then resold in other countries.

And of course, these smaller companies may end up upgrading their smartphones, but the odds are always low. So go for brands like Sony, LG and Samsung,  Xiaomi or OnePlus, which will provide some reassurance that you’ll receive an Android update.

Before you buy a new smartphone, find out about the brand’s support for updates! / © NextPit

Stay up to date with the latest flagships

It’s a sad truth of the Android world: only the latest top of the range, cutting-edge and therefore expensive, are sure to receive the latest Android updates available. Low to mid-range smartphones, as well as tablets, are often left in oblivion and abandoned to their sad fate.

The best way to be sure to receive updates, and to receive them first, is to have in your pocket the latest top of the range of the moment, such as a Galaxy S10, or an LG G8, for example.

Take advantage of the upgrade options provided by your manager, buy a second-hand top of the range, if you have a limited budget available, but make sure you don’t have a low-end device in your pocket if receiving Android updates quickly is your priority!

There are still many devices waiting for Oreo although Pie is official! / © NextPit

It’s sad, but true. Unfortunately, the devices sold by mobile carriers end up having an extra layer of difficulty when it comes to receiving system updates. Each time an update arrives on an unlocked device, it will need to go through another round of testing to incorporate carrier apps, system settings, and possible functions. This isn’t always the case, as for example, you may remember that the Galaxy Note 8 received Oreo on carrier versions slightly earlier. But nonetheless, it’s still a good rule of thumb. Just don’t forget to research the manufacturer’s history as noted above.

Android P: Which smartphones and tablets will get the update?

Will your smartphone get Android Q?

The articles above will tell you which devices will get an update to Android P and Q, but what you really need to know is that in the end, the same model of a device may end up not getting an update from its operator, even if the unlocked version receives an update. It is therefore best to avoid any doubt and purchase the device unlocked.

Do it yourself…with the right tutorials

As you probably know, every single brand hides procedures that allow you to force the update on your devices. The first thing to do is to know if your smartphone or tablet is entitled to the update and then find out how and when to get it. 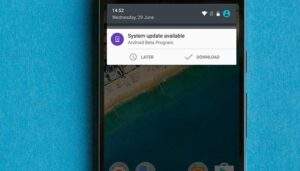