The best wallpaper apps for Android

Installing a dedicated app is perhaps the easiest way of changing your Android device’s wallpaper on a schedule. Sometimes the name just says it all. Wallpaper Changer is the best-known app for the job, though there are others around on Google Play.

Fire up Wallpaper Changer to find the app’s settings. You can choose a certain number of minutes, hours, or days as your interval, set how the app resizes or crops images, opt to change the wallpaper every time you unlock your phone, and set your wallpapers to cycle through in a random order if you prefer.

Wallpaper Changer lets you set your schedule and adjust a few other options. / © NextPit

There are a couple of other settings to tweak: you’ll need to choose the Wallpaper Changer live wallpaper as the wallpaper on your device (press and hold a blank part of the home screen to do this) and then compile a group of images via the Albums tab. If you upgrade to the Pro version of Wallpaper Changer, you can manage several different albums.

Another way of rotating through several wallpapers on your Android device is via the always-impressive “If This Then That (IFTTT).” It connects apps and services using triggers that lead to actions — and one of the supported actions is switching the background on a connected Android device.

We made an IFTTT recipe to change the wallpaper every time a new photo is posted to Instagram from within a certain area. / © NextPit

Once you’ve signed up to IFTTT and started work on your wallpaper-shifting recipe, you can choose all kinds of triggers: a new photo in a Dropbox folder, a newly liked image on Instagram, a new picture from an RSS feed, something from your Flickr feed, and so on.

For example, we created a Recipe to change the wallpaper whenever IFTTT found a new public Instagram photo taken in a nearby city center. It’s not as straightforward a solution as using a dedicated app, but it gives you a lot more flexibility when setting the routine.

You can find out more about the possibilities IFTTT offers here:

Microsoft Launcher includes Bing wallpapers that are updated daily. If you have a Windows PC, you might already be familiar with these beautiful wallpapers on your computer’s lock screen. It also intelligently presents you with apps based on your location, adding to a more dynamic experience that goes a few steps beyond automatic wallpaper rotation. The more you use the launcher, the better it gets. Plus, it is optimized to save battery and memory.

Pick a category and get stunning wallpapers everyday courtesy of Google. If you have a recent version of Android, you can have one on your home screen and a different one on your lock screen. Their selection of wallpapers is constantly growing, with pictures coming from Google Earth, Google+, and others.

As usual, Google has the answer. / © NextPit (screenshot)

For fans of classic works of art, Muzei is the choice for you. The app has wallpapers replicating some of the most famous painters the world has ever seen, such as Vincent van Gogh. The art also recedes into the background, blurring, and dimming artwork to keep your icons and widgets in the spotlight. You can also control how often Muzei automatically changes your wallpaper, with options for everything from 15-minute intervals to once every three days.

If you have a newer smartphone with a very high-resolution display, such as a Samsung AMOLED, you will probably want to take a look at Walli. The beauty of this app is that the wallpapers come in resolutions up to 4K. The wallpapers are made by selected artists, and the artists themselves can earn money from being featured on the app. That’s cool, because it still means that you can get their work for free, but the people who put in the hard graft aren’t getting short-changed. 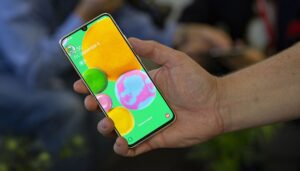