The Samsung Galaxy S9 and S9 Plus are among the best smartphones on the market right now, but as with all new devices, the cracks begin to show. These high-end devices are not without faults, so we'll compile all the problems and solutions in this article. Among the first to arise are issues with the functionality of the screen, as well as some camera faults.
Post Views: 47
PrevPrevious
NextNext

Among the first reported problems with the S9 are ‘dead spots’ towards the lower end of its display, and it seems that the S9 Plus is mainly a victim of this. On Samsung’s community forum, the question “does anyone else have issues with the Galaxy S9 touchscreen?” arose. It seems that this problem is predominantly along the bottom panel, although other reports have mentioned faults in different areas of the screen.

Are the S9 displays really the best?

The curved display is causing problems for some / © NextPit

On Reddit, a user reported issues in the Snapdragon 845 version of the S9 Plus, including ‘phantom’ touch registrations, issues with swiping on the keyboard, and again ‘dead spots’ where various areas of the screen stopped functioning completely. Could this be a common issue with the curved displays?

Is there a way to fix this?

In the forums, some reported that after doing a factory reset, the problem was resolved. However, this hasn’t worked for everyone. Increasing the sensitivity has been suggested as another solution. If neither of these have worked, the best option would be to contact Samsung directly and request a repair or replacement device.

Lighting issues in the camera

Darkness when filming in Slow Motion

In a Reddit thread, users have been debating whether the darkness of videos recorded with Super Slow Motion is as a result of a defect in the phone, with users complaining of the quality of the video even when lighting conditions should be satisfactory.

We had no issues using Slow Motion outdoors with lots of light. / © NextPit

For now, the only solution unforunately is to only use this feature outdoors in the daytime, as it needs a lot of light to work properly. It may be that the feature will only work well in these conditions, although according to one user, Samsung have stated that they are aware of the problem, and are working on it’.

Light in the wrong places

You might be familiar with this problem if you checked out our S9 camera review. We noticed an unusual light reflection, and in some photos this was very visible. We assumed this could be software problem, as it happens on both the front-facing and rear camera, ruling out an issue with the apertur

This may only be present in the pre-series version, but if you’ve had a similar experience, we would recommend you get in touch with Samsung to request a new phone.

The light has been reflected in error / © NextPit

Once we know more fixes and solutions, we’ll update this article and keep you in the loop. Have you had any problems with the S9 or the S9 Plus that we haven’t mentioned here? Leave a comment and let us know. 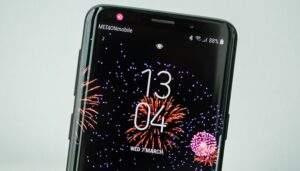