How to watch the OnePlus 7T (Pro) event live from London

OnePlus 7T (Pro) event: where, when and above all what

Yes, OnePlus, after the event in New Delhi on September 26, has decided to make another appointment this time with the international press. The appointment is on October 10, and once again in London. During this event, it will announce its new products to the international market. But what should we expect from the Chinese manufacturer in its second event in two weeks?

The OnePlus 7T has no more secrets: announced in India on September 26, it introduced something more than a few small improvements over its predecessor. Two main innovations: the photographic sector that houses three sensors in a circular design and the 90Hz display. Android 10 is already running on the smartphone, with all the new features introduced by Google in the new update and the touch of OxygenOS 10.

We have already tested the OnePlus 7T that has convinced us thanks to the concrete optimizations introduced by the brand, new opaque colors included. However, there is still an important unknown to reveal: the price. And to know it will be necessary to wait for the event in London.

The OnePlus 7T will be accompanied by its Pro variant, of which Pete Lau himself has already unveiled the design on social media. What should differentiate it from the simple OnePlus 7T is the design in line with that of the OnePlus 7 Pro with its pop-up camera, the absence of the new Qualcomm Snapdragon 855+ processor and a more powerful 4,085mAh battery.

OnePlus TV was the big star of the Indian event. It practically took the stage at OnePlus 7T launch. OnePlus presented two models, the Q1 and Q1 Pro, which offer a 55-inch Ultra HD LCD panel with a refresh rate of 100 Hz. The OnePlus Smart TV, with support for HDR10+, HLG, Dolby Vision, is based on Android 9, uses an SoC MediaTek MT5670 and aims to be not only a TV but a hub for IoT devices.

At the moment we do not know if it will also be brought to the international market but on October 10 we will know more!

How to follow the launch of OnePlus 7T (Pro) live

The only way to follow the London event is to rely on a livestream because the tickets have already gone and the competition that offered a 3-day trip to London, with included hotel, lunch with Pete Lau, a VIP ticket for the launch event, access to the backstage and the opportunity to be among the first to try out the brand’s new flagships has come to an end. 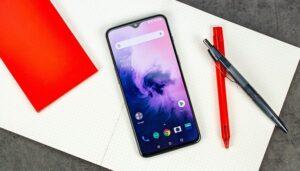