How to stay warm this winter with the help of tech

A few years ago – when smartphones were just the hottest thing – the manufacturers tried to stuff pretty much everything into these things. In the meantime, smartphones have successfully replaced MP3 players and navigation devices for many people, and even on vacation we take our photos with our multi-eyed companions. But some things still remain analog. Today’s example: an effective way to warm your hands.

You’ve probably already seen them. Those small plastic cushions filled with a gel-like substance. If you take a closer look you should notice a metal plate inside. First, you dip the pillow into a hot water and then – after cooling down – you only have to bend the metal plate and the hand warmer will release its stored energy as heat again. Depending on the heat and outside temperature the small pillow can help warm your cold hands whilst waiting at a bus stop.

A short digression (found at kids-and-science.de) and translated from German:

The pocket warmer contains a salt (called sodium acetate) and water, which together form the compound “sodium acetate-trihydrate”. This compound remains in a solid-state until heated. From about 58°C it begins to melt (this temperature is called the “melting temperature”), it must be heated up to almost 80°C in order to make it melt completely. It takes some energy to melt the compound. This energy was provided by the hot water in which the pocket warmer floated. The same amount of energy is released when the compound becomes firm again (energy cannot be lost).

A smartphone can also warm you up!

That’s what some resourceful app developers thought, and tinkered with applications that would push your smartphone to its performance limit. In the best case, a nice feeling of warmth spreads when you hold a working smartphone in your hands. Unfortunately, however, some of the components inside your smartphones wear out faster when exposed to great heat. The battery ages faster, for example. The processor and other parts should also not run at high temperatures for long periods of time, as can also be damaged. And large temperature differences are generally a horror for technology. The media response to these handwarmer apps was not very positive and meanwhile, some notorious apps like Pocket Heat for the iPhone have disappeared from the App Store (fortunately).

But they still exist, these apps. For Android phones, APK download platforms will continue to offer hand warmer apps to make your smartphone glow, if you want it to. We won’t link these platforms, because they’re not good news. For the hardcore among you, we’ve tried the App Hand Warmer. It is very small and needs less than 100 KB on your Android smartphone. With the minimum requirement Android 2.0 it is also compatible with many old Android smartphones – and if at all, you should only test this with an old device… But beware! Batteries can explode with high heat development, therefore we advise expressly against it! Leave these apps alone, and just look for a YouTube video instead if your curiosity is so great that you really want to see one in action.

Allegedly more than 200 downloads from this source and no ratings. The developers page is dead, by the way / © Screenshot / Uptodown

Hand warmers for the new generation

So again, don’t be silly with smartphone apps that promise to warm your hands, you’ll end up missing a finger and you’ll have zero fun. In addition, the resourceful gadget industry has long provided us with real alternatives.

Battery-powered and therefore rechargeable hand warmers (with safety certificates) are everywhere. Also available in combination with power brick or a flashlight, and always in an ergonomic format. At Amazon, you can get these things for about $15. For those of you who like it more stylish, reach for the Zippo Refillable Hand Warmers – which look cool and are going for as little as $13.

Interestingly, the product designers really thought about this and did not simply develop an uncontrollably warm and above all expensive power bench. The heating system can be regulated by a total of six stages.

The business for warming gadgets is booming. The Ember company, for example, has also made a name for itself. There are cups and to-go mugs with rechargeable batteries and corresponding functions for keeping beverages warm. Sounds like a tech junkie gift, but it’s really fine and sophisticated technology – which has its price. The Ember Temperature Control Travel Mug at Amazon currently costs $120, and even the Ember Temperature Control Smart Mug costs $100. After all, the gadgets are app-controlled. According to customer reviews, the Ember app even interacts with other apps on your smartphone – informing Apple Health, for example, what your caffeine consumption is looking like. 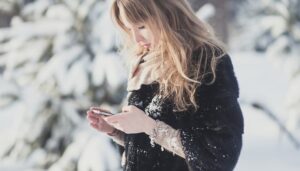