How to securely hide your files and apps on Android

Perhaps you have some apps installed that you are not really proud of – no one needs to know about that Farming Sim game you play. Either way, we’ve put together a list of different ways you can keep your personal files and apps secure.

If you really want to have the most granular control over what appears on your phone, you may need to root it. If you’d rather not do that, we’ve included some non-root options too. Plus, Android has a few built-in features you can make use of to keep secret things secret.

How to hide your apps on stock Android

How to hide your files and apps: the basics

Tools to hide your apps

Tools to lock your apps

How to hide your apps on stock Android

The easiest way to hide your apps, files and private data when handing your stock Android smartphone to someone else is to use a guest account. You can set up a guest user on your device from the settings menu. Just scroll down to System > Advanced > Multiple users to access the menu. Once you’ve got everything set up, you can quickly switch between your main account and a guest account from the drop-down menu. Guests get an experience that is as if the phone was just taken out of the box and booted for the first time. Nothing is signed in, and only the pre-installed apps are displayed in the app drawer. You can also choose if you want to allow guests to be able to make calls or not.

Create a guest account to quickly hide all of your apps and accounts at once. / © NextPit

Having a second account on your phone is also perfect if you often give your smartphone to the same person. A good example of this is a parent who hands their phone to their child for watching videos or playing games. You can set up a separate account that only shows the apps that you want your child to see, and switch between the two quickly and easily.

The basics of hiding your files and apps

While some manufacturers have added ‘vault’ features to provide a secure space on handsets (Samsung’s Secure Folder, or Honor’s Private Space, for example), stock Android hasn’t been very good at dealing with the need to selectively show files and folders by default.

What users with any version of Android can do for a really basic privacy fix is alter the names of the folders holding the content you want to hide. So if you want to hide your images, open up a file explorer (there’s a basic one built into Android Marshmallow and newer), select the folder with the images you want to hide and alter its name. Now, it won’t show your images in your gallery or files in folders.

Of course, it’s not really very hidden though – Android isn’t automatically pulling the information onto your display anymore, but if you lose your phone the files are still fully accessible.

Similarly, you can hide those annoying pre-installed apps that arrive with your phone without using a third-party app. To do so, you need to navigate to Settings > Apps and then choose the app you want to hide. Of course, if you can’t uninstall them, you can usually disable them. If you need to learn how to stop apps from running in the background, you can do that first.

Unless you want the most basic of hiding and ‘protection’ from prying eyes, you’ll probably want to turn to third-party help in getting better control of your data, files and apps. Luckily, there are a whole load of apps to help you achieve your goal.

If you just want to hide, rather than secure, your apps, one of the easiest ways to do this is by installing a non-stock launcher (assuming your manufacturer hasn’t provided a native option for hiding apps). There are a whole lot to choose from that let you hide apps, but among the most popular on the Play Store is the ever-present Nova Launcher.

You’ll need the paid version of Nova Launcher to hide apps but there are free alternatives too. / © NextPit

While there’s a free version of Nova Launcher, you’ll need the paid Prime upgrade to unlock the option to hide apps. If you purchase that, you’ll need to navigate to Nova Launcher > Nova settings >App & Widget drawers and then scroll down to the Drawer groups > Hide apps option.

Apex Launcher is another popular option that includes the ability to hide apps, except that it doesn’t require a paid upgrade to access the feature. Just open  Settings > Drawer Settings > Hidden apps  to control which are visible in your app drawer.

OK, so perhaps you’ve hidden your apps using the options above but know deep down that what you want is security, not obfuscation. To stop people opening your apps at all, hidden or otherwise, you have several third-party options available. You’ll probably want to try and couple to find one you like most.

One of the most popular free options on the Play Store to add a lock to your apps is AppLock; it works for videos and images too, but we’ve got more suggestions to lock those items later.

One thing that’s worth keeping in mind is that there’s another version called ‘AppLock Fingerprint,’ even though both apps now support fingerprint unlocking. It also brings other options, like a selfie snapshot of anyone trying to access your phone without authorization and the ability to lock your phone remotely. Both offer paid in-app upgrades too.

Once installed, you just need to scroll through a list of your installed apps and select which ones you want to protect. Then, each time you open one of those apps, you’ll be asked for a password or fingerprint to unlock them.

Oh, and if the ads are too annoying you can pay for a premium version that removes them.

Go incognito with Hide It Pro

Until now, all the apps in this list do exactly what you’d expect them to do, but there are other covert options available that put a bit more effort into hiding the fact that you’re withholding files and apps from being displayed.

For example, Hide It Pro uses an icon that describes it as an ‘audio manager’ and when you first open the app, what you see are some audio settings. Press and hold the logo and you can access the secure section of your phone where all your hidden files, apps and other content can be found.

There are also other features baked in to Hide It Pro, like file encryption on a case-by-case basis, but for some aspects (like secure messaging or browsing) you’ll need to install the add-ons separately.

Which app you use to hide or protect your files and other bits will depend on what you want to achieve. If you simply want to hide the files from showing up at all, you can do that without installing anything, but it isn’t going to offer much protection if you have data on there that someone wants (and has the opportunity) to access.

With so many apps to choose from on the Play Store, perhaps you have a favorite that isn’t on this list! Let us know which app you prefer in the comments below! 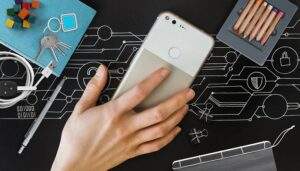