How to save your phone from water damage

If you act fast after dropping your phone in water, you might be able to prevent damage. Follow our tips below to try and save your device!
Post Views: 51
PrevPrevious
NextNext

Obviously, you should first remove the phone from the water as quickly as possible. The longer it stays there, the more water or liquid will seep through the cracks and openings. Once it’s out, there are certain things you need to do right away, and others you should absolutely avoid doing, in order to prevent water damage.

What not to do

Do not turn it on

Do not plug it in/try to charge it

Do not press any buttons or keys

Do not shake, tap or bang the phone

Do not blow on it. This could send water into other internal parts of the phone that it hadn’t already reached, causing more damage in the process

Do not use a blow dryer – it can have the same effect as described above. Heat could also cause further damage.

Your phone can still be saved! Try the following steps before giving up. / © NextPit

1. Turn it off if, it isn’t already, and hold it upright.

2. Remove your SIM and microSD cards from their slots.

3. If you have an older phone, you might be able to open up the back and remove the battery. However, since most current smartphones do not have removable batteries and are hard to disassemble, the best step would be to take it to a phone repair shop before attempting to take it apart yourself. There are DIY repair kits and YouTube tutorials you could follow, however, if you are not tech-savvy, taking it to a professional is always better.

If you can, remove the battery. / © NextPit

4. Use a cloth, sleeve or paper towel to dab your phone dry. Avoid spreading the liquid around, because that could push it into more of the phone’s openings. Just soak up as much as possible.

Tab the phone dry with a cloth. / © NextPit

5. If the water damage is more extensive, you can use a vacuum to carefully suck out water stuck in the cracks that are harder to get to. Make sure any small parts, such as the microSD card, SIM card, and battery, are out of the way before attempting this.

6. Bury the phone in a ziplock bag full of uncooked rice. Rice is great for absorbing liquid and this is actually a common method for drying smartphones and tablets. You can also buy dedicated phone drying pouches, which are worth having at home if you’re the clumsy type. If you don’t have them already, don’t bother going out to buy one. Time is of the essence, so get your phone into rice as soon as possible.

7. Let your phone dry for a day or two. Do not be tempted to switch it on to see if it still works. Put your SIM card in an old phone, or ask a friend or relative if they have a spare device you can borrow.

Let your phone dry for a day or two. / © NextPit

8. After a couple of days, you can remove the phone from the rice, insert the battery and switch it on.

9. If your phone doesn’t turn on, try charging it. If that doesn’t work, the battery may be damaged. You could try a replacement battery, or consider taking your smartphone to a repair shop to be checked by a professional.

10. If your smartphone has turned on and it is running as it should, you should still keep a close eye on it for the next few days, to see if you notice anything out of the ordinary. Play some music to check the speakers and ensure the touch screen still responds as it should.

Hopefully, it will start up as normal again. / © ANDROIDPIT

In the future, avoid taking the phone with you when you go to the pool, use the bathroom or do the dishes to avoid the possibility of accidents.

Hopefully these steps have helped you rescue your phone from death by drowning. If you want to protect your phone from water damage in future, you can also purchase a waterproof phone case. There are some good options available from brands such as Otterbox, Griffin Survivor and Catalyst.

A number of phones are advertised as water-resistant or waterproof. Be aware that when phone manufacturers say this, it only applies under a special set of circumstances. A phone’s resistance to water often depends on the clarity of the water, the depth of submersion, and the length of time for which it is submerged. We wouldn’t advise testing your smartphones’ water resistance capabilities by putting it in the washing machine or throwing it in the pool.

Phones like the Galaxy S10 are almost fully waterproof. / © NextPit

IP68 certification? IP67? What does it all mean?

Pay specific attention if your phone has an IP53 rating – that means it is only partially water-resistant and will not withstand water sprays. Although manufacturers might claim otherwise, smartphones with this rating can even get damaged if used in the rain.

It’s also important to remember that no smartphone is fully waterproof. However, devices with an IP67 and IP68 rating are as close as you can get at the moment. Phones with these ratings are also becoming more and more common, especially among flagships compared to a few years ago. That’s not always the case with mid-range devices.

Here is a quick list of some of the current smartphones with IP67 and IP68 ratings:

Do you have any other tips on how to save a smartphone from water damage? Did our advice help you? Let us know in the comments. 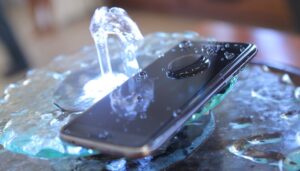