How to put limits to app usage on your phone

Lots of smartphones users have no idea how much time they spend on the apps on their phones daily. With "digital wellbeing" tools, we can not only check how many hours we waste on social media, games, and other applications but they also allow users to set daily limits in both Android and iOS.
Post Views: 48
PrevPrevious
NextNext

Lots of smartphones users have no idea how much time they spend on the apps on their phones daily. With “digital wellbeing” tools, we can not only check how many hours we waste on social media, games, and other applications but they also allow users to set daily limits in both Android and iOS. Learn how to control how you spend time on your apps.

Back in my home country, Japan Brazil, Android phone owners spent around 5 hours per day using mobile apps in 2021 on average, and the trend is for that number to keep growing, with more and more people using not only social networks and online games but also shopping, banking, and doing bureaucratic tasks.

Related: Learn how to check your screen time on Samsung Galaxy phones

To help users in their “digital detox”, both Apple and Google offer tools to control how much time is spent on individual apps, in the iPhone’s case, it is even possible to set limits for app categories (for example, entertainment, games, social networking).

Set time limits for app use on Android

For Android users, the tool to manage how much time can be spent on applications is somewhat hidden in the Digital Wellbeing feature. To activate and set limits on individual apps follow these steps:

Tap on the Digital Wellbeing graph (the graph style may change depending on your phone).

Some System skins may show the option as App timers.

Tap on the hourglass icon next to the (un)desired app.

Manage your time in iPhone apps

The option on iOS/iPadOS to limit app usage can be activated under the Screen Time feature. You can set daily time limits to all apps, app categories, or even individual applications:

Choose an app category, or expand them to display individual apps.

Select an application or category and tap Next.

Set a daily time limit and then press Add.

It is also possible to customize days on iOS, for example, to limit social media use in the office / © NextPit 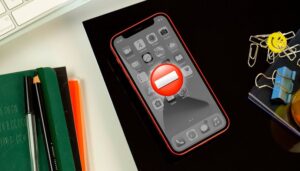