How to make Google Home and Alexa safe for kids

Just like your pet, connected home tools tend to complement your pretty family portrait. In the United States, according to an article in the LA Times, a one-year-old child would have said “Alexa” before he could even say “Mom”. This trend is expected to grow as Dave Limp, Vice President of Devices and Services at Amazon told The Verge that more than 100 million Alexa-equipped devices had already been sold and had reached millions of homes.

Google Home vs Amazon Echo, which one to choose?

A child as young as one year old pronounced “Alexa” before he could even say “Mother”. / © NextPit

The Mountain View firm and its Google Home, a direct competitor of Alexa, are far behind. Google is trying to catch up and announced at the Google I/O 2019 the arrival this summer of the Google Nest Hub, which will offer all the features of a connected house by integrating a smart camera, speakers and a screen capable of managing all connected objects nearby. Enough to compete with Alexa seriously, then.

More and more households are connected with such tools, and the figures speak for themselves: according to a National Public Media study, 8% of Americans first became owners of a domestic assistant during the 2018 holiday season. This is a major step forward since the same study shows that, at that time, 21% of Americans owned this type of equipment, 14 million more individuals than in 2017. Sales of domestic assistants grew by 78% between 2017 and 2018.

In one year, the sale of domestic assistants in the United States grew by 78% / © Google

In Europe, this type of device has not been on sale long enough to have significant figures, but it should be noted that they were out of stock on Christmas Eve last year.

If this is not an isolated case in the United States, it could also happen in Europe, in your own home. Leaving a child alone to play with Alexa is not necessarily a good idea…

How to integrate parental control?

Also, to keep an eye on the use of your children’s domestic assistant, but also to limit the possibilities of requests and avoid that they come across images that may offend their sensitivity, there are some dedicated apps that should be downloaded.

On Google Home, for example, you can easily install Family Link to check their activity (and encourage them to have a regulated use of the tool), and downloaded applications without preventing them from updating those you already have, set limits (time of use per day, extinction at curfew time….), and of course block the result to some requests.

FreeTime, Amazon’s parental control tool, is not yet available in all European countries. fizkes / © Shutterstock

As for the Amazon tool, there is an application called “FreeTime”. In the form of a subscription, it allows you to manage the use of Alexa, adapted to each child in the family. Without this subscription, you can still have a minimum control directly in the settings of your Amazon Echo, with the ability to view the history, but also to put a code to limit and control the purchases of your blond heads on the tool.

Beyond the installation of parental controls, it goes without saying that a preventive discussion about the use of these devices is essential with your children, as well as the use of the Internet and a smartphone.

What effect does this have on the education of children?

If a child’s first word is addressed to an electronic device and not to his or her parents, does that mean that it has a real effect on your child’s education and development? The question arises.

Many parents find that the use of voice assistants makes it easier for their children to entertain themselves. Indeed, they no longer need to know how to read or write to launch their favorite cartoon or an evening story. According to a Cornell University researcher, Solace Shen, there is a lot of positive in these vocal/child assistant interactions such as playing quizzes, listening to playful and interactive stories, all without any screens.

The advantage of voice assistants is that there is no screen. Morrowind / © NextPit

Interactions yes, but in a polite way! According to the University of Montana child psychologist Rachel Severson, parental example is very important. Also, when your assistant does not understand you, keep calm and do not start insulting him, this could be a very bad example taken up by the child, who at an early age has difficulty distinguishing between a conversation with a human and a conversation with an artificial intelligence tool. Also, teach them to say “thank you Alexa”, “please Google”…

So that’s the real black spot of these devices on child development: they have everything, right away. The domestic assistant finds the favorite piece of your blond heads in a split second and gets them used to having everything right away. Once again, a discussion with the child is required to make the child understand the difference between a person and a tool with AI.

An interaction with Google Home and Amazon Echo is not worth a conversation with an adult. / © NextPit

Even if they have a lot of fun with it, don’t forget that Alexa, like Google Home, are not people who take care of spending your child’s time. A real interaction with a human being is worth all the answers to requests, however fast they may be 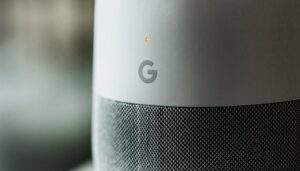