The Android team is expected to finalize the features in this mobile operating system by August this year. However, considering how previous OS versions 10 and 11 were released in September, it is possible that Android 12 will also follow the same path. However, that doesn’t mean you will receive the update in 2021 itself as the software update process of manufacturers such as Samsung, Xiaomi and Motorola are very different from that at Google.

Knowing this, many developers have already started working on Material You in order to offer a similar customization experience with alternative apps. This will more often than not involve the likes of launchers, widgets, and icon packs that are available on the Play Store. Through the use of such third-party apps, you will be able to enjoy the Android 12 look and feel on your smartphone today. I explain in further detail on how you can go about doing this below.

How to get quick shortcuts for Android 12

How to get widgets for Android 12

How to get icons for Android 12

To obtain the Android 12 look, you will need a compatible launcher

Changing the look of the user interface begins by changing the app launcher, or simply known as the launcher. That’s because many of the suggested widgets and icon packs will need to be compatible with the default app launcher in the first place.

Available options on the Play Store are varied and promise to change your UI experience in a whole new way. I would strongly recommend you download the Nova Launcher, which happens to be one of the most popular apps in this category and is available for free on the Google Play Store.

After downloading Nova Launcher, you will need to configure the app according to the system’s default launcher, as this will make it easier to implement changes such as new icon packs and widgets as suggested in this article.

However, you can use a launcher of your choice as long as the app allows the use of customized icon packs and widgets that have been optimized for Material You. We list several launcher options to choose from in the Play Store for your perusal.

Once you’re done with that, let’s check out the next step.

How to get quick shortcuts for Android 12

Apart from the launcher, Android 12 also boasts a very striking feature: quick shortcuts that will occupy a larger area of the screen. Apparently, there is still no perfect option to customize any smartphone in this regard, but the Mi Control Center app offers the closest experience that one can find today without having to wait for Android 12.

The main issue would be the Accessibility and Notifications permissions because the app will modify selected system features in order to work properly. In order to function, it will need to gain permission to read and control your smartphone’s screen. The app has already garnered more than 95,000 reviews in the Play Store with an average rating of 4.4.

The basic version of the app allows you to use the notification bar and quick shortcuts as seen in the image below. As I mentioned earlier, it is not perfect, but it does come very close to what Android 12 will look like while offering additional settings options for many devices.

Android 12 wallpapers have leaked on the Internet some time ago, with many channels having already made high-resolution versions available. This is the case of Russian site rozetked, offering wallpapers available in two folders on Google Drive, as well as on Mr Android FHD.

To use these images as a wallpaper on your smartphone, just download them directly to the device, long press on the screen, pick Style and Wallpaper > My photos > Download > Select the desired image > Confirm.

That’s it! You now have an Android 12 wallpaper on your smartphone.

Get Android 12 Wallpapers on your smartphone right now / © NextPit

How to get Android 12 widgets

We are right now in Beta 3.1 version of Android 12 and widgets have not yet been added to the system to date. This makes us extremely curious, especially for those who are currently running the Android 12 beta build. However, some of the major widgets in Android 12 are already available as third-party apps on the Play Store.

As much as I’ve tried to locate free options to suggest in this tutorial, talking about widgets that have been specially optimized for Material You without mentioning KWGT would be heresy. To have the Android 12 look and feel on your smartphone, this paid app is one of the best options that I’ve discovered to date.

After downloading and installing the app, you will need to create a widget via KWGT. It is only from there you will be able to add widgets from the Android 12 package. In order to do so, follow these instructions below:

Long press the home screen and tap the Widgets option.

Scroll down until you find Kustom Widget. From here, drag and drop the widget size of your choice onto the home page. Follow it up by selecting the Click to Setup or hold down to Resize.

When you launch KWGT, navigate to the Android 12 Widget package. There are 110 widget options available, where you can choose the one that you would like to add to the screen.

After selecting the widget of your choice, you will be redirected to the edit screen. Tap the Save button in the upper right corner that looks like a 3.5″ floppy disk.

Once configured, you will have 110 options of Material You-based widgets to use / © NextPit

Okay! You can now enjoy a widget experience that is very similar to what Android 12 will offer. The most interesting thing here is, the widgets will also change color here as you change wallpapers. However, my experience with the music player or volume controls happen to be a rather muted affair.

Using KWGT, it is possible to change the color of the widgets according to your Wallpaper colors / © NextPit

In the Play Store, there is a free version for those who want to have just the design of the watches of Android 12. The widgets are very well done too, but they do not offer the same color change option according to the theme used in the wallpaper. However, it already offers an experience similar to the new Material You shapes.

How to get icons for Android 12

Another important point in any smartphone user interface would be how the app icons look like. When it comes to customizing icons, the Play Store offers a wide range of options to choose from. In my test, I used the “Pixel pie icon pack” and the “Android 12 Icon Pack”. Even though I had to fork out money for the Android 12 Icon Pack, I found it worth every penny I paid, where you can see just how much of a visual improvement it delivers in the screenshot below. 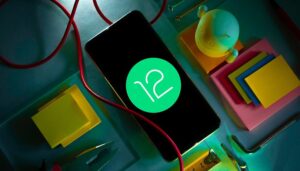