How to fix unsupported video format error on Android

There's nothing more frustrating than downloading or transferring a video onto your Android phone, only to be greeted with audio codec and video codec-related errors. Some of the common error messages include “can't open file” or “unsupported video format.
Post Views: 75
PrevPrevious
NextNext

Why won’t my video play?

The most likely reason you see a “can’t open file,” “unsupported audio codec,” or “unsupported video format” error is because your current media player doesn’t support the codec of your video file. Another possible reason is that the audio codec is unsupported.  Below, we discuss the various possible means to solve this rather annoying problem.

How to fix unsupported video format error on your smartphone?

The easiest solution to this problem is to switch from the default video player and download a new one. Here are some of the most versatile Android media players we recommend:

If you’ve ever used VLC on your PC, you’d know that it’s one of the most convenient and reliable media players out there. The same applies to the VLC for Android app. It includes all codecs without the need for additional downloads. It provides support for DivX and XviD compressed videos, as well as a variety of formats – MKV, MP4, AVI, MOV, Ogg, FLAC, TS, M2TS, Wav, and AAC.

For those who love to watch foreign movies or anime, you’d be happy to know that VLC also supports multi-track audio and subtitles. Not only that – the app is light, free, and does not have obnoxious ads. It’s one of the best, if not the best, Android media players. Installing VLC for Android is usually the one-stop solution for one of the most asked questions related to this topic. – ‘How to play mp4 on Android’.

VLC is our Android media player of choice / © NextPit

This is another light and easy-to-use Android media player. Just like VLC, MX Player supports multiple files (.avi, mpeg, mp4, wmv, DivX, Xvid and more) but also a variety of subtitle formats, including .txt, .sub, .srt, .idx and others. It also offers gesture controls, like swiping down to reduce brightness, scrolling backward and forwards to move subtitle text, and more.

Unfortunately, the interface of the app is quite basic, but that might be appealing to some. The free MX Player version also has ads, but if you can live with that, it’s a great player that supports most of the video file formats and codecs for Android. If not, there’s also an ad-free version available for $5.99.

Note: Indian users will note that MX Player is now also an OTT platform. In case you find MX Player a bit too cluttered owing to this, it is recommended that you look at our dedicated article that talks about the best media players for Android.

Convert the video file to a supported format

In most cases, downloading and installing a capable Media Player app should solve the annoying unsupported video format error. But in case you are not interested in downloading and installing an app, the other way around this problem is to ‘convert’ the video into a format that your phone understands. And there are several apps that allow you to do that on your smartphone itself. Let’s take one of the more popular apps out there, called Video Transcoder.

The best thing about Video Transcoder is that it is free to use and happens to be open source as well. There are no annoying ads as well. Second – the product supports a wide variety of file formats and codecs. The user interface is a bit plain jane – but is functional and easy to understand.

In case you happen to have access to a computer, there are several free video converters that can easily convert your video file to a format that your phone understands.

Now that you know how to fix the unsupported video format error on Android let us explore the reasons why the message appeared in the first place. To understand this, you need to understand some basic facts about video codecs and containers.

What is a codec?

Codec is actually the abbreviation of coder-decoder. The name actually says it all: it’s a method for encoding and decoding data, specifically compressed data. As you might have guessed by now, like.mp4, which is a popular video format for Android, there are video codecs for Android and audio codecs for Android. Usually, the job of a codec is to compress a set of data (video or audio) for storage and later decompress it for playback or viewing.

Codecs are different from containers and file formats. AVI, for example, is often mistaken for one when it’s simply the video file type and one of the more popular Android video formats.

HEIF and HEVC: the future of multimedia files explained

What is a container?

Usually, a container is also referred to as a file format. It takes care of packaging, transport, and presentation (while the codec prepares the file for these actions). Containers take care of synchronizing the audio and video. A container is part of the file that determines the file type. In simple terms – if you have a nextpit.mp4 file, MP4 is the container.

You have just learned the reasons why some video files may not play on your Android phone. You also know the various methods using which you can easily fix this problem. In case these solutions helped you, do let us know about the same in the comments section below. 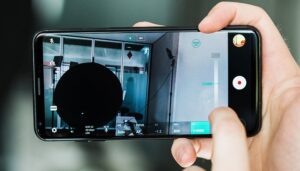