How to create and share your own Apple Watch faces

What is new with Apple's watchOS 7? For starters, it will allow you to share watch faces with others easily. In this post, we will show how you can let those creative juices flow in order to conjure and share your creations with your family and friends.
Post Views: 41
PrevPrevious
NextNext

The watch face happens to be the central element of Apple Watch – just like any other timepiece, of course. While Apple still does not allow one to create completely custom watch faces, watchOS 7 offers some improvements in this aspect, as well as enhancements concerning the available watch, faces in addition to the unique modifications that can be made to customize these watch faces according to your liking.

The actual creative process has seen very little change in watchOS 7. Users will still be able to create or make adjustments either directly on the Apple Watch or on an iPhone that is already connected to the smartwatch.

Apple Watch or iPhone: How to create or edit watch faces

As with earlier watchOS versions, watchOS 7 lets you adjust the different details by selecting them on the display. One particular change that was introduced in watchOS 7 is this: doing so is no longer achieved by touching and pressing down on the display for a longer period of time – rather, a simpler mechanism of a long press is enough to get the job done. Apple has distanced itself from the so-called Force Touch in watchOS 7.

When in Edit mode, you can now select the desired watch face or create a totally new one by swiping to the end of the existing watch faces. Depending on the available options that a watch face offers, the colors can be changed or additional functions are selected accordingly.

Thanks to the ability to share watch faces, Apple Watch becomes even easier to customize. / © Apple

Apple has also made sure that watchOS 7 will now provide developers with a little bit more leeway in terms of functionality, allowing several different functions to work on a single app. How does this benefit the user? For instance, one will be able to display different details within a single weather app on the same watch face.

You can also use the iPhone to change the watch faces within the Apple Watch app itself. This option would most probably be hugely popular among users simply because of the iPhone’s far larger display that makes it easier for customization and configuration purposes.

The big innovation in watchOS 7 has a social slant to it – being able to share the many watch faces that you have come up with. After the installation of the new operating system, you will find the old familiar share button in many places, which drops a hint concerning the sharing feature.

With the share feature in watchOS 7 and iOS 14, watch faces can be easily shared with your contacts. / © Apple

If this option is activated, personal information, such as the location of a weather widget, may be shared with the contact. Alternatively, you can disable the sharing of such data. In this case, only generic information will be shared.

Also, you can also attach a personal message to the shared watch face if you so desire. The transmission of the watch face can be done via iMessage. As for the recipient of the watch face, they can easily open it in the Messages app.

In addition, there is yet another option for you to work with – by sending a watch face via email. This opens up a whole new avenue of possibilities where you can even share your creations on a personal website. In order for this to happen, you will have to make use of the file with the “.watchface” extension attached in the email. In any event, where such a file has been loaded on your Mac, you will also able to transfer it to an iPhone via AirDrop or the Files app and open it there.

You will require watchOS 7 or newer to take advantage of this particular feature. Users of older watchOS versions cannot use the shared watch faces. This also limits the number of supported smartwatches. At least an Apple Watch Series 3 or Apple Watch SE is required because it is only on these timepieces where watchOS 7 can be installed.

watchOS 7: Watch faces on the web or in an app

The sharing of watch faces also carries the bonus of allowing new websites that specialize in the creation and distribution of such efforts, so expect to see more of such sites mushroom in the near future, if not already. For instance, buddywatch already has a large list of shared watch faces that can be directly installed from there. There is also an app that makes the installation an even easier process.

Developers also have the ability to distribute their own sample watch faces in their apps from within watchOS 7 itself. These can then be used as inspiration or a template for your own future creations. 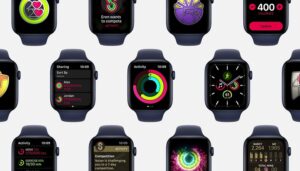