How to boost Wi-Fi signal on your smartphone

Check how far you are from the router

If the issues remain even after you are relatively close to the router, it is always advisable to restart it once.

Short of turning the router off and on again, which should always be your first option when suffering from a poor Wi-Fi connection, another way is using the Wi-Fi analyzer app. Firstly, it provides the best channel to use for your particular network. Without going into detail, it allows you to optimize the network and means you don’t have to be a technical whizz-kid to do so.

Secondly, it assesses which network in the area has the most stable connection, which often isn’t the one to which your phone connects by default. Lastly, it offers easy access to network information such as your IP address, network gateway, DNS, etc. It’s not essential, but useful for power-users.

The Wi-Fi Analyzer app might look intimidating, but it is useful once you get used to it./ © NextPit

Download the Wi-Fi Analyzer app from the Google Play Store

If you are using an iPhone, an alternative app to do this called Network Analyzer.

You can download Network Analyzer from the iOS App Store

Check if your phone case is blocking signal

Using a case with your phone? If yes, you might want to check if one of the causes for poor Wi-Fi (and cellular) connectivity is tied to the case. It is a known fact that many phone cases actually make your Wi-Fi signal worse, especially if they contain metal.

To see if your case is affecting your Wi-Fi signal, do an Ookla speed test with the case off, then, in the same location, put the case back on and perform the test again.

If you see a difference when using your case you may want to look at alternatives. You can also perform the same test using Ookla’s official speed test app. However, the app asks for a wild number of permissions, so we recommend uninstalling it as soon as you have concluded your test.

If you notice a decrease in Wi-Fi speed from no case (left) to with case (right), then you need to reconsider your case. / © NextPit/Ookla

Make sure your router in the perfect spot

Another trick that can greatly improve the Wi-Fi connection at home is the optimization of the router’s location. Often, it is placed right next to the phone or cable outlet, but this is rarely the best for your connection.  There are several apps that help you optimize the position of your router. However, most of the instructions are too technical to be carried out by a layman.

The best recourse, therefore, is to get in touch with your ISP, who will have all the necessary tools to position your router at the best possible location inside your home. Ideally, this should be done by the ISP on the day of installation.

In case you have a large home spread across multiple floors, it is also recommended that you take a look at Wi-Fi Mesh routers.

Here’s how to get free Wi-Fi anywhere

Use the 5 GHz band for Wi-Fi connections

Most Android smartphones (and routers) of today support the 5GHz frequency band. While setting up your router, chances are high your ISP technician created two separate Wi-Fi networks to choose from. Most routers name the 5 GHz networks by suffixing the term 5G at the end of the SSID.

If you think you are on a slow 2.4Ghz network, it is always a good idea to switch to the 5 GHz band where there’s much more free space on the spectrum. There are 23 channels of 20 MHz each on the 5 GHz frequency, which is much more than the 14 channels offered on 2.4 GHz. Because the channels don’t overlap, you’re likely to get a better signal on your Wi-Fi when connected to a 5Ghz network.

Note that a 5Ghz network has a much lower range compared to 2.4Ghz. You may see a significant drop in speeds if you are connected to a 5Ghz network, but you are physically far away from the router. In such cases, it is better to switch to the “slower” 2.4 GHz band.

Update your radio or firmware

If you’re receiving OTA updates from your carrier or manufacturer, then this probably doesn’t apply to you, but if you are running custom ROMs, you may find yourself occasionally needing to manually update the radio on your Android. As an example, here’s how to update the bootloader and radio on the Nexus 5. You should also make sure you’re on the latest version of Android to ensure the best performance. To check this, go to Settings > About > Software updates.

If you’re not on the OTA trail, you may need to update your radio manually. / © NextPit

Note: This step is no longer an option on modern Android smartphones.

In the Android Settings menu, there is a nice little option that tells your phone to avoid poor Wi-Fi connections, meaning that while it is scanning for available networks, it will actually avoid trying to connect to those with poor signals. This will save you a lot in terms of power and frustration. Just go to Settings > Wi-Fi and tap the overflow menu button, and then Advanced. Here you will see the checkbox to avoid poor connections. 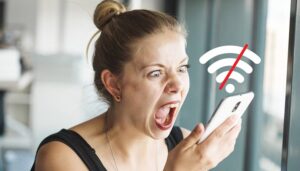