Google’s HDR+ for the LG V30: Get incredible wide-angle photos

We've got a great new tip for LG V30 users. On the XDA Developer Forums, a port of Google's camera app has been making the rounds, but so far, the popular app has only been able to work with the main camera of any given compatible device.
Post Views: 54
PrevPrevious
NextNext

The camera app of the Google Pixel 2 offers a ton of interesting features and gives great results. It’s no wonder that many developers have been working to port the Google Camera app to other Android smartphones. There’s a special port for the HDR+ and Portrait modes for phones packing either Qualcomm or Samsung SoCs. However, all of these modified camera apps have so far been unable to work with the second camera of any dual camera smartphone…until now. For dual camera smartphones from LG, there’s good news, because cstark27, a developer from the XDA Developer Forums, has made a port of the Google Pixel 2 Camera app compatible with the wide-angle cameras of the LG V30, V20, G6 and G5.

HDR+ is actually a Pixel 2 exclusive feature, but thanks to porting, the wide-angle camera from LG now also benefits from Google’s technology / © NextPit

We installed the camera app and compared the quality of the photos with LG’s default camera app with HDR enabled. Our video and camera expert, Stefan, has looked at the pictures and here are his impressions of the pictures:

Detail reproduction is significantly improved, probably due to the fact that the Google app uses less intense JPEG compression, almost doubling file size during recording. For example, the trees in our city panorama can still be seen clearly with HDR+, while the LG V30 results in blobs.

For photos with big brightness differences – for example, portraits with backlighting – it’s clearly noticeable that HDR+ improves the dynamic range. In our sample photo, it ensures that my face looks better lit in the photo and details are still recognizable in my dark gray sweater. At the same time, the sky is not washed out as in the V30 shot and you can still see details of the clouds.

There’s not such a big difference at first glance with every shot. But, when looking closely at the photo, you can see that HDR+ gives details on the trees while LG’s does not. / © NextPit

The bottom line is that the difference is dramatic, and it once again demonstrates the power of software. Unlike image sensors, which virtually every manufacturer can buy from Sony, Google keeps its image processing algorithms under lock and key – just like Samsung or Apple. In the long term, it will be difficult for smaller manufacturers to keep up with these industry giants and their enormously complex software departments

Here are the photos in their original resolution

While the app improves image quality, the experience of using the app could be better, even if it corresponds to the original by Google. It’s not possible to switch back and forth between the two rear camera, and the app crashes from time to time. So, if you want to use HDR+ on the LG V30, G6 or older, you should only use it as a supplement to your main camera app.

Did you try the Google Camera app for the LG V30? Got any other great LG V30 tips and tricks to share? Let us know in the comments! 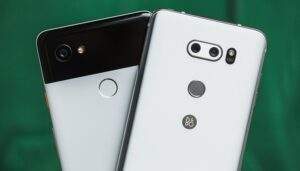